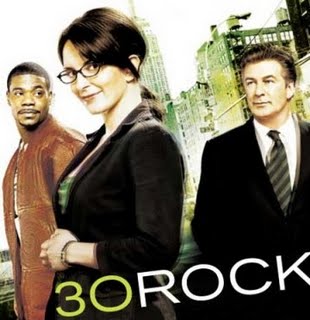 After hiring street performer “Partybot”, an exhausted Liz Lemon realizes she knows nothing about her newest cast member. They don’t know his real name. They don’t have a resume. They just pulled the guy off the street. After inviting her to dinner, Jack and Liz head over to meet the new kid on the block. In fact, the entire cast and crew crowds around. The door opens.

What’s more disappointing is that nobody seems to know who that even is. Transitioning right into another identity shift, the actual new actor shows up. 30 Rock: meet New Jack. Jack Baker. Without missing a beat, “old” Jack heads off any potential confusion by dubbing him Danny. The confused gentleman replies, “Did you just change my name?”

We learn that “Danny” has never done any real acting and has spent a large amount of time exposed to silver paint fumes– his only notable performing experience being a star in a canadian football movie. Searching desperately for newbie guidance, he asks Liz. Her pointers? “Don’t eat prop food.”

Jack and Liz head out to dinner and shoot the breeze, covering random, typical buddy conversation cliches like “Would you rather have the powers of superman…?”

It becomes more and more apparent how well Jack knows Liz– he can predict what she’ll say, how she’ll react, and he even moves the candle before she dives into dessert knowing her sleeve would likely catch fire. You’d almost suspect it was a romantic relationship. Quickly, we see the motives behind dinner; Jack wants Liz to star in a “Dealbreakers” related talk show.

Still trying to find his way around the TGS set, Danny asks everyone and anyone for help. Pete offers his conversation ending tactics, which he immediately puts to use: “Oh! My kid’s sick.”

Reveling in her newfound success, Jenna and Tracy drop a bomb on Liz; initial forays into showbiz representation often fail. Jenna offers to set Liz up with someone and Liz falls hook line and sinker into another one of Jenna’s epic muck ups. The aloof duo’s budding friendship seems closer than ever and they deem themselves “The Problem Solvers” after giving alleged good advice to poor Liz.

Making sure she’s not taken advantage of while she’s a hot commodity, Liz heads over to meet a sniveling awkward child who claims to be a “junior agent” that represents humans and monkeys. Liz opts to leave Jack’s eagle’s nest and chill out in the gutter with pigeons.

Still seeking guidance and trying to suppress his Canadian accent, Danny starts to confuse and influence the other members of the cast. Not relying on Kenneth for everything is uncharted territory for the kindly page boy, and Tracy and Jenna just find it incredibly weird that Danny wants to do things “for himself.”

As Liz exercises her independence, Jack retaliates with the firm hand of a business man and goes over her head. He starts to produce the show on his own and replace her– NBC owns the rights, they can do as they please. Infuriated, Liz threatens to sue.

Confused about why Jack is “being such a wang” about the matter, Jack is rather honest. After working with him for four years, she didn’t trust him to produce her talk show. What a stab in the back.

Kenneth continues to be confused by the lack of actors relying on him. It seems that the new guy’s innocence has an effect on Tracy and Jenna that Kenneth just can’t handle. Unable to cope with the change, Kenneth approaches Danny and eggs him on.

Driving him slowly crazy as he tries to prepare, Kenneth sees the opportunity to solve his problem. “Embrace your anger,” he says, as Danny gets fired up about the sweet page boy’s creepy “Don Knotts” face and calls him a weirdo. Mid-rant, Kenneth cuts him off. “Congratulations, you’re an actor.” Finally able to take advantage of the plebians, he also finds himself able to correctly pronounce “about”. The mark of a true actor? The ability to overcome your innate accent!

Tracy, Jenna and Kenneth reconcile their working relationships. Kenneth tells them he’ll always take care of them, Tracy noting that he [Kenneth] often knows what he desires even before he himself does. Kenneth produces a pizza box, and Tracy looks dejected. “I wanted waffles.” Opening the box to find it full of delicious belgian treats, things start to finally turn around in the episode.

Tracy has set up Liz on another agent meeting, with the producer of “Sports Shouting” — a show that is more or less self-explanatory. Whilst dining, Liz realizes her mistake in bailing on Jack, as her vapid dinner date allows her sleeve to catch fire and he waves it off as he answers his mobile. She exits, presumably going to reconcile with her tail between her legs.

Simultaneously, Jack is spending the evening with her replacement and sees, slowly, that the changes his “Top Chef” star switcheroo seeks are exactly the changes that Liz needs in her life. Seeing that the overworked star he plans to hire wants more time to spend with her kids, to get the stains off her shirt and to live an easy, comfortable life, Jack has a change of heart.

Like the good businessman he is, Jack takes off to search for her. They come together outside 30 Rock, like some whirlwind business romance, complete with slow motion entrances and wind machines. “It’s always been you. I want to do business with you, Lemon.” She accepts, as if it were a marriage proposal.

By the end of the episode, it is clear that harmony has been restored at 30 Rock but let’s be real. This show is nothing without chaos. Stay tuned, America.