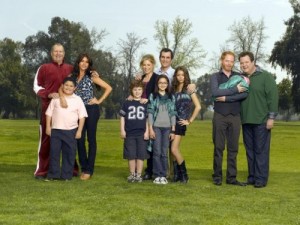 Competition is a funny thing. The ultimate result is that there is a victor — but nowadays with all the concern for political correctness and our progressive mindsets, competition has evolved into merely showcasing everyone’s strengths and then taking them for ice-cream afterward. Everybody wins.

Manny, whose father was a legendary swordsman, gets involved in fencing, and at first Jay does not have high expectations. Jay is your typical sports fan dad. He thrives on winning. And with Manny being surprisingly talented, Jay goes wild with pride.

The whole gang joins the audience to watch, with each of them dealing with their own little competitions among themselves.

Overhearing Jay gush about his stepson Manny and his former desire to have a trophy in his house for once, Claire and Mitchell look dejected. They seem to feel that they, his own children, haven’t lived up to his expectations.

Spouting facts about the history of fencing, Alex becomes Haley’s victim again. “You know what’s even nerdier than fencing? Knowing when it began.” But Alex’s nerd status has its benefits. When Haley’s precious phone dies, Alex informs her that it just “statically defacticated” and she can recharge it by rubbing the battery on her hair. When she finds out later that it was just a revenge tactic, Alex brings it up a notch. “At least I didn’t give myself a bald spot.” Touche, sis. She later gets brother Luke to charge his iPod in his mouth.

Manny tries to quit as Jay gets more and more enthused — even creating “Who’s Da Manny?” shirts. When Gloria finds out he wants to give up because he doesn’t want to fight a girl, she flips. He had been raised to respect women, and if Manny should bail out it would be an offense to her. Claire and Phil start discussing the abilities of their children and note that Alex will be good at anything she tries, Haley will probably “meet someone” because she’s pretty and it won’t matter, but Luke? Oh, what can be said about odd little Luke…

Mitchell can’t shake the feelings disappointment. Cameron and Mitchell talk about it once back at home. Mitchell denies there’s anything wrong, but Cameron presses. “Could this have something to do with….ICE SKATING?” Mitchell and Claire, we find out, were a figure-skating pair called “Fire and Nice” that ultimately came to an end when Claire quit. Seemingly harboring resentment for years, the two grew apart. When they all regroup for Manny’s next fencing match, Cam blows the lid on his secret anger.

They fight in the parking lot– Claire being accused of stealing his moment. She claims she quit because she was bigger than him and he kept dropping her. As they reconcile, Claire realizes he’s trying to pick her up to prove himself.

The next match gets underway and Manny has been urged to be ruthless. Real Estate rep Phil has taken Luke to work with him after he realizes he can use him to garner a sale. When the gang finds out Manny’s female opponent is a diabetic orphan, it’s already too late to stop the impending bloodbath.

Back in the parking lot, Mitchell bears his sole to Claire. He confesses to not having liked skating at all, but resents that they had fallen apart between choosing sides when their parents divorced and them both just gradually drifting apart. Expressing that he misses being on Claire’s team, Mitchell finally gets to the heart of the matter. He misses the bond– not the competition. Claire gets up and gets into form, and they start practicing in the parking lot.

Hoping not to be shamed any further, the troop marches out of the gym, Jay wonders aloud how it could be any worse. After taking a few steps, they see Mitchell hoisting Claire into the air as if they were skating in the Olympics. How about now?

It’s not about being the best. It’s not about winning or losing. Our Modern Family may have a twisted sense of competition, but we all do. As the family gathers around the computer to watch Cameron’s footage, we start to realize, maybe we’re all losers. But it doesn’t matter– because at least we’re bound to each other by that connection.