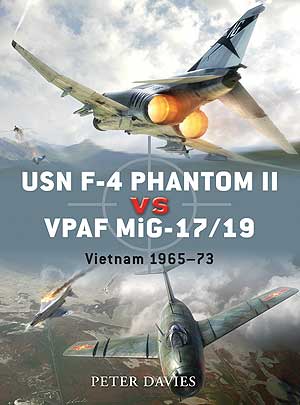 And the hits keep on coming.

Peter Daviesâ€™ follow up to â€œF-4 Phantom II Vs. MiG-21â€ is every bit engaging as his earlier work. While the former book dealt with US Air Force Phantom operations, this work covers US Navy use of the Phantom. Also, the Vietnamese opposition now takes shape in the form of the MiG-17 and MiG-19.

This book is volume 23 of Osprey Publishingâ€™s â€œversusâ€ series, which pits comparable military hardware against their counterparts. This time, it covers two classic Vietnam foes and it makes for compelling reading, chronicling how what should have been a one-sided US turkey shoot turned into a struggle for air superiority. The book is profusely illustrated with excellent pictures of planes and pilots, showing details of the aircraft and putting faces to the pilots in the narrative.

Excellent use of captions appears throughout the book. In the case of the MiG-17 Davies uses these to point out small details to show the reader how to tell a Soviet built MiG-17 from a Chinese built version (the Shenyang J-5). He also shows some details rarely seen. For instance it is well-known that the MiG-17 had excellent visibility out of its cockpit, but Davies shows how there is plenty of framing and heating elements that actually block a lot of the pilot’s view.

The book also contains gorgeous color plates of both aircraft, their cockpits and drawings of their weapon systems. As in the other â€œVersusâ€ titles two biographies of notable F-4 and MiG pilots are also thrown in for good measure. These are notable because Davies didnâ€™t take the easy route and cover pilots with ace status only. The VPAF pilot is an ace but the USN pilot isnâ€™t, but had an amazingly colorful career.

Davies clearly describes the development of all three aircraft. Itâ€™s intriguing to see the very different design philosophies of the USA and USSR. The US concentrating on speed and avionics while the Soviets concentrated on reliability, ease of construction and maneuverability.

In 1965, the F-4 Phantom II was the most modern fighter in the western world. Meanwhile, the MiG-17 was considered a decade out of date and the MiG-19 was viewed as a stop-gap while the MiG-21 was entering service. As it turned out, the Phantomâ€™s missiles needed serious bugs worked out and were unreliable and the F-4 pilots needed much better air combat training. It was also easy to spot visually due to its large airframe and smoky engines.

Meanwhile the heavy cannons on the MiGs, designed to shoot down NATO bombers, proved a deadly threat in a dogfight. A single hit from the MiGâ€™s 37mm cannon could devastate a Phantom. The â€œoldâ€ MiG-17 proved extremely capable in a turning fight and the MiG-19 turned out to be one of the best balanced fighters of its day, mixing good armament, speed and maneuverability. Both were also very hard to spot visually due to their diminutive size.

He covers the progression of the F-4 and how its adoption drastically changed US fighter tactics. Dogfighting against enemy aircraft was viewed as a thing of the past. Now, the Phantom would loiter above the US fleet AND fire its radar-guided AIM-7 Sparrow missiles several miles away and would only use its short ranged AIM-9 Sidewinder missiles if the Sparrows happened to have missed.

But as Davies chronicles through the firsthand accounts of Phantom pilots the Sparrows usually did miss. In one case an AIM-7 exploded under the Phantom that fired it and knocked it out of the fight. In these circumstances, the F-4 crew was now dangerously close to the more maneuverable MiGs.

The MiG-17 was a development of the successful MiG-15 from the Korean War. They look similar and that fact caused the US military to underestimate it as a warmed over MiG-15. In fact, the MiG-17 was a total new aircraft with much better performance and phenomenal low-speed maneuverability. The MiG-19 was similar but had better supersonic speed and better performance, albeit it was used in low numbers by the Vietnamese Peopleâ€™s Air Force (VPAF).

Davies tells of how the Navy, alarmed at how poor its Phantoms where doing against the older MiG-17, quickly set out to rectify its deficiencies. They set out to improve the reliability of its versions of the Sidewinder and Sparrow. They also created the Naval Fighter Weapons School, aka â€œTOP GUN.â€

Davies writes that the Vietnamese were not idle and also developed tactics to exploits their jets dogfighting prowess. Through accounts and diagrams he showed how the MiGs would fly in a Lufbery circle or â€œWagon Wheelâ€ formation trapping US airplanes inside of it. They also tried to hug the ground to confuse the radar on board the Phantom.

All in all, this book is a real treat. It flows smoothly as do most of Davies books. It seems less technical than does his earlier â€œversusâ€ title, but that is because the Navy took a less technical approach to the MiG threat.
The book does have some minor points of interest that are lacking. Navy phantoms never had built-in guns and had to rely on external pods and Davies did not mention their employment. He also did not mention that MiG-17 began using air to air missiles late in the war. Again, these may not have been used against US Navy aircraft, but he should have clarified this.

These facts can be forgiven because the overall quality is great. It makes for insightful reading, filled with equal parts of tech data and war stories. Itâ€™s highly recommended that you read this along with his earlier â€œF-4 Vs. MiG-21â€ title to see just how differently the US Air Force and Navy answered the MiG threat.

This book is fact filled, easily read, and affordable. What’s not to love?