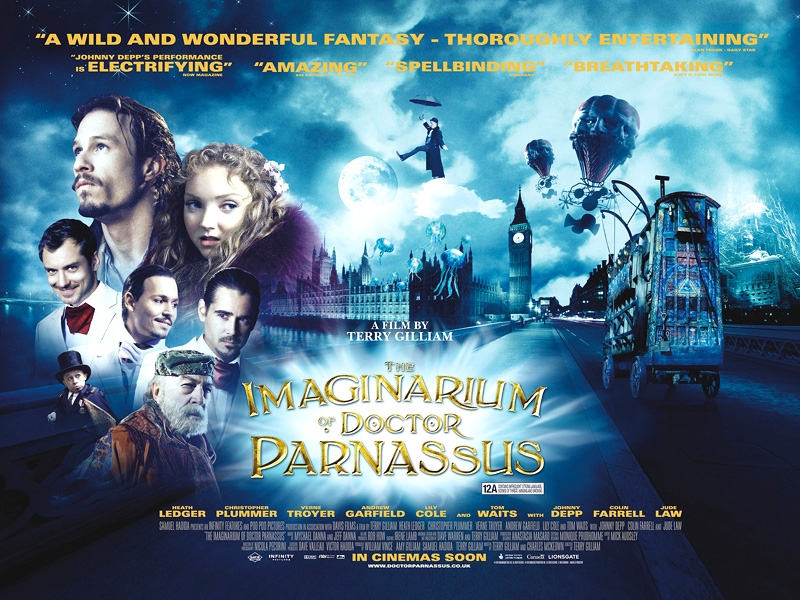 “The Imaginarium of Doctor Parnassus” is a remarkable feat of the imagination from the mind of Terry Gilliam, and is also noteworthy for being Heath Ledger’s final film. Gilliam has sculpted a film that is both beautiful and fantastical, while still managing to be a haunting tribute to the late actor.

Gilliam’s career started out with â€œMonty Python,â€ where his limitless imagination was displayed through his cartoon work for the series. Since those days, he has continued to work, creating movies that often push the limits of the audiences’ expectations as they enter his imagination. Often taking relatable protagonists and immerses them in a dark, dream-like universe, “Brazil” is a prime example. His last film, “Tideland” was imaginative, but extremely incoherent, with Jeff Bridges playing a corpse. However, “The Imaginarium of Doctor Parnassus” is a return to the limitless possibilities of Gilliam’s bizarre imagination. It is filled with striking visuals that capture the mind and give us a small idea of what may go on inside his head.

“The Imaginarium of Doctor Parnassus” has a unique and mythical concept about a contest between Doctor Parnassus (Christopher Plummer) and the devil. Parnassus believes that people should be ruled by their imagination, while the devil believes that temptation will always conquer the mind. An Imaginarium that looks suspiciously similar to a mirror is created, where strangers enter and must choose between the imagination and temptation.

Parnassus has a traveling theater company that persuades strangers into the Imaginarium, where they discover a man (Heath Ledger) trying to commit suicide. They soon discover that this charismatic young man, who is suffering from amnesia, is able to get them more patrons and money than they could have ever imagined. But the real mystery remains whether or not this young man is working with the devil or not.

Ledger is wonderful in this role, creating both a dark, mysterious side to balance a light, romantic nature. This picture is dedicated to Ledger and his family, which is the perfect way to remember the spirit he brought to the cinema.

His death happened during a hiatus from production and he did not get to film three pivotal fantasy sequences, which take place in the Imaginarium. Obviously, this is a world of illusion and Gilliam did a splendid job of putting the final product together. The people see what they want to, and for those three sequences, Johnny Depp, Jude Law and Colin Farrell fill in admirably. They represent byproducts of the imagination of the person in the Imaginarium, which is an inventive and practically flawless way to find a way to finish the film.

The rest of the cast for this picture is amazing, and allows you to become immersed in the outlandish fantasy world. Plummer is one of the best performers in the business and is a welcomed treat to any picture. To see him working opposite Verne Troyer is anything but conventional, yet somehow, this odd pairing works excellently.

Aside from the stellar performances, what makes this film unlike anything you have ever seen is the fantasy sequences, which appear to be live action versions of Gilliam’s crude â€œMonty Pythonâ€ drawings. It seems like film technology has finally caught up with Gilliam’s imagination.

Currently in limited release, “The Imaginarium of Doctor Parnassus” is a masterpiece worth seeking out and is one of the most original films in recent years.