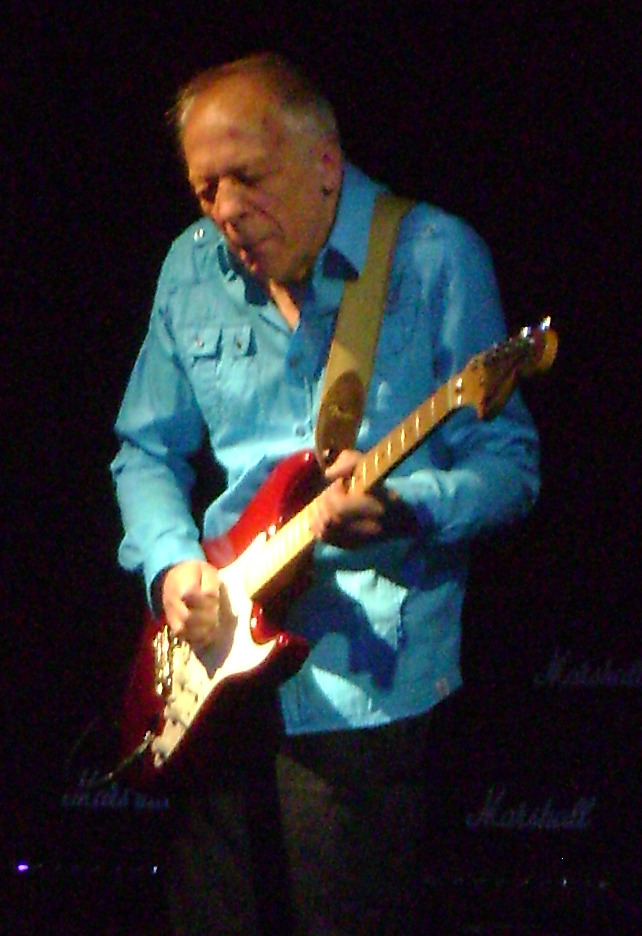 After his early days as guitarist of neo-classical progressive rock band â€œProcol Harum,â€ Robin Trower branched out to forge a dynamic solo career that exhilarated the rock and roll world with his guitar excellence and dynamic song writing. From his classic â€œBridge of Sighsâ€ (1974) and â€œIn City Dreamsâ€ (1977) CDâ€™s to the recent critically acclaimed â€œWhat Lies Beneathâ€ release, Trower has evolved as a guitarist and lyricist and continues to impress. One of the most underrated guitarists on the planet, Trower recently played B.B. Kings (see article on this site) for a two night run and wowed the packed houses. Review Fix interviewed Trower while he was on tour and spoke about his guitar influences, sharing a bill with Jimi Hendrix, recording and playing Shea Stadium in the 1970â€™s.

Review Fix: Thank you so much for taking the time today. I know itâ€™s been a very busy tour. I looked at your itinerary. Was it from June to now?

Robin Trower: Weâ€™ve done the U.S. in two sections: Seven weeks each section; first on the west and now weâ€™re on the east as it were, and we had a break in the summer, but I was touring in Europe with Jack Bruce.

RF: Seven Moons ( Jack Bruce and Robin Trower album ) Â was released as a CD and a DVD also?

Trower: Thereâ€™s a Seven Moons live DVD, but Seven Moons the album was actually out a couple of years ago.

RF:How has the tour been? I saw you at B.B. Kings on September 19th and I thought the crowd was really enthusiastic, just fantastic.

Trower: I really enjoyed B.B. Kings. It was great.

RF:The tour, itself â€“ just the different audiences â€“ is it the same reception?

RF: How would you differentiate the response? And in Europe, I think, you played a blues festival in Italy, and played in Norway before that.

Trower: Yeah, very good, I mean not quite as vocal as the U.S.

RF: David and Derek Sutton have been very accommodating. They sent me a copy of â€œWhat Lies Beneathâ€ ( latest Trower CD), and Iâ€™m very impressed. Itâ€™s very atmospheric and the tracks flow together. Is that plan your idea?

Trower: I really wanted to make every track fit in terms of vibe. I think thatâ€™s why I wanted the tracks to flow togetherÂ  like that.

Trower: Itâ€™s just convenience, really. Everybody on the road â€“ everybody that played with me on the road â€“ lives in America, and I was making the album in England.

RF: Do you think the latest CD is a complement to your career orÂ  a new direction?Â  I just love the sound; it has so many different elements of different styles of music in it. Do youÂ  think it is supplemental or some new direction?

Trower: A bit, I think.I wonâ€™t say itâ€™s a new direction because the stuff Iâ€™m working on for the next album isnâ€™t particularly like that, but there will be elements of it there.

RF: What I like about it is that the instrumental work is fantastic as usual â€“ some really great lyrics too on the tracks, fantastic lyrics.

Trower: Iâ€™m glad you like that. I worked pretty hard on that side of things.

RF: And your vocals sound good on it, too.

Trower: Thank you very much.

RF: How much have you sung before?

Trower: Just bits and pieces over the years.

RF: The members of the current band are a great bunch of musicians. Peter Thompson was in the band â€œSilverhead.â€( IÂ interviewed the lead singer Michael De Barres on this website), and Davey Pattison was in the band Gamma. What makes this combination so special? I really like the way you guys sounded â€“ fantastic; how long are you with this version of this band?

Trower: We actually worked together for a while in the â€˜80s, and this band has been together a few years now and thatâ€™s why I think you got that sort of real glue to the performance, because we have worked together so much.

RF: I love the chronicling of the recording process in the CD notes , getting back to the album Â â€œWhat Lies Beneathâ€ Was that your idea?

Trower: Yeah, I just thought it might be of some interest, just to keep up to date of what Iâ€™ve done so far and I could look back and see what I needed to work on, et cetera.

Trower: Yeah, he produced it.

RF: The sound is just fantastic. Did you have a very good relationship working with him and the other people on the CD?

Trower: Yeah, definitely. I mean Livingstone was my bass playerÂ and vocalist during the â€˜90s. I had a band together with him, and we worked on and off together, since then he sort of went into production; heâ€™s a very gifted guy.

RF: Can I go back to the past a little bit?

RF: Is it okay with you?

RF: You had a long relationship with Gary Brooker (Procol Harum keyboardist and vocalist). You started with him in a band called The Paramounts, right?

Trower: It was mostly soul and R&B covers, Ray Charles, James Brown.Â  Stuff like that.

RF: Isnâ€™t it interesting that your relationship evolved into being in â€œProcol Harumâ€ which was an Â innovative band? I call them a neoclassical, classic rock band.

Trower: Well the thing is after The Paramounts, Gary really started strongly becoming a writer, and that was what â€œProcol Harumâ€ grew out of the fact that he got together with Keith Reid, the lyricist.