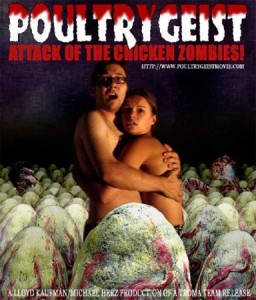 â€œPlays like a grindhouse analogue to the psychosexual provocations

of the artist Paul McCarthy and is every bit as liberatingâ€¦

joys of projectile vomiting and explosive diarrhea can be.â€

December 23, 2009 (New York, NY): After grossing the highest per-theater average in the nation on its opening weekend and playing in 300 American cinemas, Tromaâ€™s latest theatrical hit is going high-def. Troma Entertainment announced today that it will enter the Blu-ray market with the February 23 release of Lloyd Kaufmanâ€™s POULTRYGEIST: NIGHT OF THE CHICKEN DEAD. Tromaâ€™s most critically-acclaimed film of the decade, POULTRYGEIST will be the first in Tromaâ€™s new line of special edition Blu-ray discs, with a new Blu-ray to follow every month!

Shot and screened on 35mm, the film blends the feather ruffling politics of FAST FOOD NATION, the satire of SHAUN OF THE DEAD, and the show-stopping musical numbers of THE TOXIC AVENGER: THE MUSICAL to skewer the fast food industry, limousine liberals, and almost everyone else in American society.

An homage to true grindhouse horror with Rogers and Hart caliber musical numbers, POULTRYGEIST has been hailed as â€œa masterpiece!â€ (Ainâ€™t It Cool News) â€œWithout a doubt, the best film Tromaâ€™s ever produced (Jason Pollack, C.H.U.D.). Variety exclaims, â€œItâ€™s a veritable Cluckwork Orange!â€ Director Lloyd Kaufman, who has been credited with inventing the â€œslapstick goreâ€ movie in 1985 with THE TOXIC AVENGER, continues his visionary body of work with this â€œfowl movement.â€

â€œPOULTRYGEIST continues Troma Entertainmentâ€™s long history of cinematic political activism,â€ says Kaufman, who is also the co-founder of Troma Entertainment. â€œBig Media puts the Kool-Aid in the water and brainwashes the public to line up at fast food joints like obese, artery clogged zombiesâ€¦ except in our film itâ€™s chicken-Indian zombies. The American Indians were exterminated and so are billions of innocent chickens! The zombie is a perfect metaphor.â€

Highlights from the Blu-ray include as follows: new commentary tracks by stars Jason Yachanin and Kate Graham, a commentary track by director Lloyd Kaufman and writer/editor Gabriel Friedman, Poultry in Motion: Truth is Stranger than Chicken, a hilarious and unflinching feature-length behind-the-scenes documentary, the short film Chicken Ass, Ron Jeremyâ€™s alternate â€œhappy ending,â€ and much more.