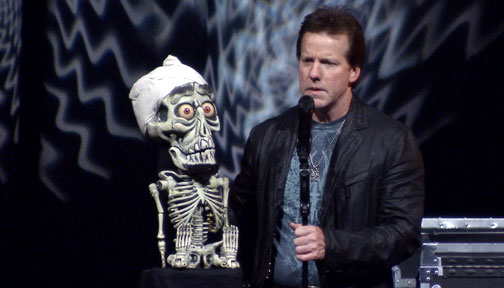 Bryan W. Simon’s â€œI’m No Dummyâ€ is much more than a documentary about the history of ventriloquism. Tracing the art back to the vaudeville days and putting a face and heart to many of the stars behind it, this documentary will make you want to find a puppet of your own to give life to.

On its own merits, it’s a well-told story that is made that much better thanks to candid interviews from Jeff Dunham, Jay Johnson and Lynn Trefzger, among countless others.

Needing no introduction, Dunham is the modern-day star of the art form, consistently challenging himself to come up with new and interesting characters and off the wall comedy. Through the interviews of some of the older stars, you see how much of an impact Dunham has had in the industry over the last 20 years and how pivotal he is to its continued survival. Even if you’ve lived under a rock and have never seen him perform, there are enough clips during this documentary to showcase his talent and convert you into an ardent fan.

With much of the documentary circling around the future of the medium, it’s only fitting that someone like Dunham is prominently featured. With all of his segments a complete success, it’s easy to see why â€œI’m no Dummyâ€ is a quality piece of cinema.

A bit older than Dunham, Johnson, however, is no slouch either, paving the way for Dunham and others in the ’70s during his amazing run on the mega-hit sitcom â€œSoap.â€ Equally hilarious, but a bit more brash [Dunham has his moments, but Johnson’s main puppet, â€œBobâ€ is one nasty piece of oak], Johnson’s segments on the documentary prove that the art of ventriloquism possesses far more depth and charisma than most would have thought otherwise.

While Trefzger’s parts in the documentary don’t have the same staying power as her predecessors, the amount of historical content, clips and great sources drown out what could have otherwise hurt the overall product. Like any documentary, the research has to be extensive and paint a picture, otherwise the material won’t be as interesting as it needs to be. In the case of this documentary, Simon has without a doubt did his homework and made his subjects charming, thoughtful and fun, from start to finish.

It doesn’t take a rocket scientist to tell that ventriloquism is a form of comedy that doesn’t have the same following it used to. Nevertheless, after watching this documentary, you’ll wonder why that is exactly the case. Unlike the performers featured in this film, you’ll find it quite impossible to keep your mouth closed while watching.