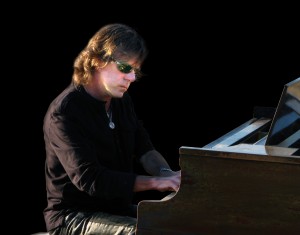 Two thirds of one of the super groups of the â€˜70s played a stellar show at The Nokia Theater on Broadway on Thursday April 8. Keith Emerson (keyboards) and Greg Lake (bass and guitar) of Emerson, Lake and Palmer wowed a classic rock crowd thirsting for progressive rock.Â  Embarking on a scaled down tour, forsaking progressive rock bombast for a musically intricate, yet intimate performance, this â€œUnpluggedâ€ styled show underscored the talent that these two master musicians possess.

The pair, using the backdrop of Manticore studios, giving the assembled a feel of a recording session, played unique yet faithful versions of songs covering their long and dynamic careers as band mates and in their separate former groups, The Nice and King Crimson. In addition, Emerson and Lake shared priceless anecdotes about their musical partnership and fielded questions from the audience of 2,100.

Before the two rock legends took the stage, the sight of Emersonâ€™s massive keyboard set up with a Moog synthesizer and Korg in full view, Lakeâ€™s bass, intensified the crowdâ€™s anticipation and enthusiasm. As they took the stage to a huge ovation, they explained that the show would be a little different than your average rock extravaganza with the intent of creating a feeling of a residential recording studio.

They began with the Emerson/Lake composition “From the Beginning,” from their 1972 album â€œTrilogyâ€ to the strains of Lakeâ€™s mellifluous rhythm guitar work. It also featured Emersonâ€™s yeoman keyboard styling on a Korg Oasys. The pair was clearly in their element right away.

Next up, Lake Â introduced a nugget from the debut album of his former band King Crimson, â€œIn The Court of the Crimson King,â€(1969), â€œI Talk to The Wind,â€ explaining after that he is just getting over laryngitis. No one seemed to notice, because his one of a kind vocal tone and texture were clearly evident. â€œTake a Pebble,â€ from Emerson, Lake and Palmerâ€™s debut Â release took the crowd to sonic â€œnirvana,â€ incorporating Emersonâ€™s breathtaking glissandos and Lakeâ€™s melodic bass lines.

On this night, the performance incorporated themes from â€œTarkus,â€ the bandâ€™s 1971 masterpiece from the album of the same name. Emersonâ€™s ease and dynamic playing which alternated between soft melodic cascading passages to aggressive lightning fast runs on the keyboard, made the crowd wonder what took these guys so long to get back together, which is where most think they belong. Another interesting aspect of the show was the conspicuous absence of Carl Palmer, who was replaced by synthetic drums. He will join the pair at the previously mentioned classic rock festival this summer.

Lake treated the crowd to a wonderful story about his visiting Paris and wanting to write a French song, which eventually became â€˜Câ€™est La Vie,â€ a song that he explained became a number one hit for French recording artist Johnny Hallyday.

The show hit its stride as soon as Lake played his 12 string guitar and the man who is called â€œThe Voiceâ€ awed the throng with his dulcet tones. Emersonâ€™s beautiful accordion styled solo could make one feel like they were on the Seine or watching the lights of Paris. The mutual respect and admiration that Emerson and Lake have for each other was there for all to see as Emerson pointed to Lake after his magnificent rendering.

Emerson next took center stage where another keyboard was placed and treated the masses to an impromptu talk on the significance of Dave Brubeckâ€™s â€œBlue Rondo a La Turk in his life (The first record he bought) and Mr. Brubeck as a jazz innovator and musical inspiration. He proceeded to give the audience a keyboard lesson displaying an array of mind-blowing melodic â€œexcursions.â€ Emerson is like fine wine, getting better with age. A section of â€œPrelude to Hope,â€ an Emerson band solo piece was featured prominently.

â€œBitches Crystal, another classic track from â€œTarkus,â€ was played with the duo giving the audience huge laughs at some priceless anecdotes about Emersonâ€™s twirling keyboard at 1974â€™s California Jam in which the trio (ELP) played in front of 200,000 fans before it was performed. As usual, the pair was spot on with the musicality and feel of the original recording.

Emerson continued his music history lesson with a story about Leonard Bernstein watching the band perform and ultimately remarking, â€œThe singerâ€™s pretty good,â€ which received a raucous laugh from the audience. He then wowed the crowd with his version of the aforementioned Bernsteinâ€™s â€œAmerica,â€ from West Side Story, which Emerson had covered with his progressive rock innovators, The Nice.

Emersonâ€™s work on The Moog synthesizer was a high point of the night. With sounds going in different directions, Emerson managed to create a musical â€œWall of Soundâ€ that defies categorization. He then talked about Robert Moog himself who changed the landscape of classic rock with his invention of the Moog synthesizer, which is prominently featured on many ELP album tracks. He also talked about the fact that some Emerson, Lake and Palmer compositions are being covered by Symphony orchestras across the world. 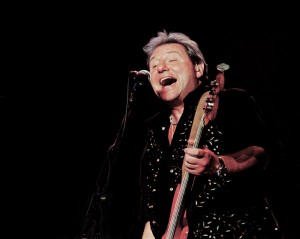 The show reached its highpoint with a rousing version of ELPâ€™s tour de force , â€œPirates,â€ from 1977â€™s â€œWorks Volume 1,â€ the 13-minute and 19 second opus which some of the bandâ€™s aficionados consider its musical zenith. This performance, which featured a percussive thump on simulated drums, a rhythmic keyboard sound, Lakeâ€™s lyrical tribute to buccaneers and exquisite vocals, gave the audience the feeling they were riding on the high seas searching for a bounty or a ship to plunder.

A unique aspect of the show was a Q & A session with the audience. Given the fact that so many Emerson, Lake and Palmer fans were under one roof, it was surprising that some of the questions left a lot to be desired.

One touching part of this session was a woman in the crowd describing how her older brother used to serenade her on the piano by playing ELP material as she lay at his feet. She asked if Mr. Emerson could replicate that experience on stage, which he did by playing some magnificent piano magic while she lay by the keyboard. Emerson and the woman got a laugh and a warm feeling out of it. This was a touching moment, which once again points to the power of music and its emotional impact on us all.

Emerson and Lake left the stage to thunderous applause and were called back for an encore of Lakeâ€™s hit â€œLucky Man,â€ from their self-titled debut album. Lake explainedÂ how the band needed something to fill the last few minutes on that album, so he suggested a song he had written as a 12-year-old, â€œLucky Man.â€

The pair spoke about the solo that Emerson wanted to add and as he practiced his first take, the
engineer and the rest of the band thought it was a â€œkeeperâ€ and the rest is history. This version started with a beautiful, piano introduction by Emerson and featured Lakeâ€™s acoustic guitar and his soothing voice. As the crowd cheered these rock icons, a part of the last songâ€™s lyric, â€œWhat a lucky man he wasâ€ comes to mind. On this night, the audience, were the lucky ones. This warm-up for the High Voltage Classic Rock Festival portends great things for the full reunion of Emerson, Lake and Palmer.