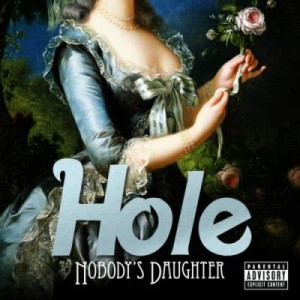 The word â€œholeâ€ has certain connotations: Depth, emptiness, loss, escape, an opening. Perhaps, even, a noticeable tear in the baby doll dress worn by the infamous lead singer of Hole, whose fourth studio album dropped on April 27th 2010.

With the absence of the Eric Erlandson, Melissa Auf der Maur and Patty Schemel, is Hole just America’s Sweetheart (2004) â€“ Courtney Love’s solo commercial flop â€“ all over again? Her standard sound retained most of the grittiness and pissed-off attitude that Hole thrived on, but one can only recycle the same message so many times before the audience starts to tire.

Nobody wants to hear complaints anymore; almost all the most popular and infectious songs nowadays are about having a good time, representing their community or self-reliance. Maybe Love’s never heard of the old saying, “God helps those who help themselves.”

Actually, the only original member of Hole has helped herself â€“ to a gaggle of talent. Returning armed with Linda Perry (4 Non Blondes) and Billy Corgan (Smashing Pumpkins), Nobody’s Daughter sounds like the abandoned child of all the previous albums’ charting singles, so the title is, at the very least, apt. As she frequently relates best in her own social networking soap opera, without Love there simply is no Hole.

Linda Perry previously collaborated with Love on America’s Sweetheart (2004), and does what she does best once again: help other artists shine. She’s done it with Pink, Christina Aguilera and numerous others. Corgan returns, a former lover and musical partner from 1998’s Celebrity Skin, unfortunately regretting the decision publicly on Twitter. Accusing her of not being able to write her own songs and chastising her parental abilities, Nobody’s Daughter’s authenticity becomes compromised.

Is this all put on? One never can tell with Hole.

What one might not expect from the album is the level of honesty and unabridged autobiography Love allegedly puts forth for us. At times, the message is cryptic, as are the Jabberwocky-sprinkled liner notes and lyrics, dedicated both to “motherless children and fatherless babies in this world” and to “the light and the eternal clonthian fire.”

Ummâ€¦ what? Not even the black belts of google-fu can decode out what she’s talking about. But you can certainly tell the color of her mood ring. Anyone can detect the self-aware self-loathing spirit Love isn’t the least bit ashamed to own up to.

In songs like “Letter to God” and “Honey,” we hear heartfelt pleas for normalcy and a return to days gone by, but don’t think Hole has lost its loveable nonchalance and filth. “How Dirty Girls Get Clean” is rather telling, and “Never Go Hungry” assures the audience she’s not giving up merely because she lacks the support of her former bandmates.

Love’s current backing lineup consists of Micko Larkin on lead guitar, Stu Fisher on drums and Shawn Dailey on bass. Relatively unknown, the title track almost begs us to even forget that they’re there to begin with.

“Skinny Little Bitch” and “Samantha” aggressively attack, though with cleaner melodies than 1991’s Pretty on the Inside â€“ they’ve matured (or hired a better producer). “For Once in Your Life” and bonus track “Happy Ending Story” are slower and thoughtful, closer in-depth to Celebrity Skin’s â€œNorthern Starâ€ than Live through This’ gentle-but-biting â€œMiss World,â€ but equally as chill. “Loser Dust” is a bit more punk-ish and practically channels Hole’s earlier days.

What’s aggravating about Nobody’s Daughter is that everything about the album makes you want to dislike it; the backstory, the lyrics, the inevitable drama attached to it. Despite that, it’s a catchy album that flows well and echoes all of Hole’s previous successes. It rocks hard enough to help you wholly forget that it’s really rather a sad, revealing tale. The question is: do we all want to keep thinking about the bum raps, the tragedies and the grudges?

What’s breaking chart records nowadays are songs about escape, but usually they’re not so whiny about it. And although the sound is tight and the effort is clearly there, Nobody’s Daughter is simply another vanilla addition to the soundtrack of life. That being said, it is something you can listen to straight through on repeat.

But, jeezaloo, Courtney, can’t you write a song about rainbows and lollipops instead of getting even or drug addiction once in a while?