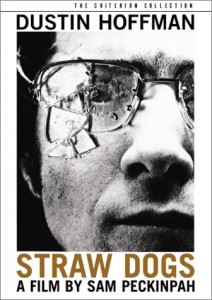 “Straw Dogs” is an uncompromisingly brutal study of how far one man can be pushed before reaching his breaking point. The film unrelentingly hangs on to the strong belief that all men are capable of violence, and to prove that point the main character of David Sumner is a pacifist in the most extreme way. The audience for this picture will reach a breaking point long before Sumner ever does, and you will be left wondering why this character isn’t filled with rage. But like all of Sam Peckinpah’s films, a violent and ultimately grim climax is inevitable.

Sumner (Dustin Hoffman) and his wife Amy (Susan George) head up to England to avoid the conflict that many Americans were facing during Vietnam. Sumner doesn’t seem to want to take a stand on either side of the conflict, and wants a break from the situation. He gets more than he bargained for when he hires a group of men to fix up his new home. At first it seems as if these men are having a little fun with the new American in town, but those minor jokes soon escalate when Amy’s beloved cat is murdered and left hanging in the closet.

Sumner tries to overlook this personal violation of his home, but what happens next in the picture will leave audiences in shock. Amy is brutally raped by the men in a scene where Peckinpah shows no constraints or concern for what the audience may think. It is a painfully hard scene to watch, one that generates the right emotions in any logical thinking human being.

This film explores themes that inspired some exploitation films such as “Last House on the Left” and “I Spit on Your Grave.” The major difference between “Straw Dogs” and the latter films mentioned is the far superior acting that creates palpable tension. That realistic tension takes the picture into much more serious territory.

In the hands of an actor with lesser strengths than Hoffman, the audience would lose interest and respect for Sumner instantly, but he draws you into this timid character and makes him endearing. Also, what works for Hoffman is that he is not a tough guy, and fits the role of the quiet mathematician who managed to score a hot wife very well.

The chemistry between Hoffman and George seems not existent except for a few scenes, but that works, because this creates a more realistic portrait of the characters. It seems they don’t have common interests but somehow want to repair that, and you can’t help but wonder if their marriage was a mistake. Few early flirtatious scenes set up that the two may share a genuine love, but that concept is not explored further because that is not the tale Peckinpah wants to tell, and it is unnecessary due to the heavy-handedness of the movie.

Peckinpah starts the picture off at a slow pace, slowly building up the animosity for the characters in the hearts of the audience. Like Sumner, you feel that you are personally being pushed by the director to feel anger, and when the ending arrives, it is completely cathartic. Your tension has risen, and you enjoy seeing the bad guys get what they deserve.

The ending is exquisitely directed â€“ the conflict is set up inside the home, where Sumner finally decides to stand-up for himself and defend his home and integrity. The most unconventional household items become his weapons, and also allow him to put the bear trap above the fireplace to good use.

“Straw Dogs” is currently being remade with James Marsden, and this seems pointless since the 1971 version still packs a strong punch for today’s audiences if they would give it a shot.

“Straw Dogs” is a one-of-a-kind motion picture from a one-of-a-kind director. This stands to remind audiences of what a talented director Peckinpah was before drugs and alcohol completely destroyed his mental state. After this, his only other noteworthy picture was “Pat Garrett and Billy the Kid.”