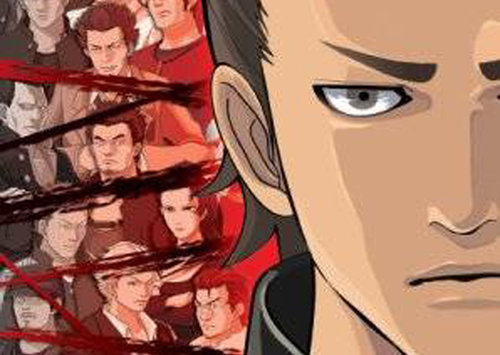 Fifteen years ago, beat-em-up games were a dime a dozen. As a result, every two-bit company released unpolished brawlers to try to keep up with the demand, more often than not, resulting in stinker titles that left many gamers hungry for something of quality. Simply put, for every Bad Dudes and Double Dragon out there, there were countless other forgettable titles that ended up watering down the genre, practically ruining it entirely.

Because of this, the need for games of this genre isn’t nearly in as high demand today, making it that much weirder that a company like Atlus, known for its in-depth and traditional RPGs, would take a chance on an eclectic beat-em-up the likes of Kenka Bancho: Badass Rumble.

Nevertheless, while not boasting the most innovative combat system around, KBBR is too cool for school. Oozing with style every chance it gets, thanks to a quirky story and funny characters that make up for the relatively repetitive combat, KBBR in an enjoyable title that is better than you’d expect it to be.

That doesn’t mean it doesn’t have it’s fair share of problems. Regardless of them though, it’s a game that’s worth checking out- especially if you’re sick of all the boring ports constantly being shuffled on to the system.

First off, the story that fuels this game feels like its plucked straight from a Japanese Anime. Weird, verbose and silly, you’ll fall in love with it before the first tutorial is finished. Simply put, the cast of characters are charming, endearing and totally off the wall, forcing you to continue playing when you’re essentially bored with the repetitive nature of many of the bouts. Speaking of the combat system, what starts off as different ultimately becomes boring and somewhat stale. Before each battle, players must remember a line of text and then recite it by pressing the right buttons that correspond to the words. If done correctly, your bancho [tough guy] will get in the always-important first shot. At first, some of the sayings are funny, but more often than not, they get old fast, making the entire pre-fight jibber jabber exchange feel tedious and flat.

Once in an actual fight however, it’s simple, button-mashing goodness, but that in itself gets old too. Luckily, there are a plethora of different moves that are constantly being added to your repertoire, giving you the option to continually change-up your move set. This is perhaps one of the saving graces of the game as it allows you to tinker with your character and keep combat fresh and help you give the solid story a chance to play out. The same thing goes for the ability to play with your appearance, as it makes the boring exploration parts of the game a bit more fun to deal with.

In the end, if you don’t find something incredibly hilarious about running around in a banana-suit, beating up Japanese hoodlums, there’s something definitely wrong with you.

As a result, Kenka Bancho: Badass Rumble may not be a must-own game on the PSP, but it is a delightful diversion from the mainstream that can provide hours of beat-em-up fun if you give the game’s unique sense of style some time to percolate.

General Hospital writer Scott Sickles is lucky. He know that as a playwright, ideas for the beginning and end of...