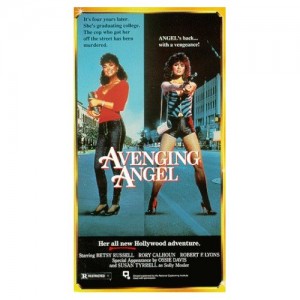 “Avenging Angel” takes the gritty material of a former hooker, who is out for revenge, and gives it the psychological damage of an episode of “Full House.” It is one of the strangest pieces of cult cinema, because it can’t decide if it is a family-friendly comedy, or a hard-boiled action film. The confusing tone causes the picture to fail miserably, while being oddly entertaining for lovers of kitschy fun.

“Avenging Angel” is the sequel to 1984’s “Angel,” which featured the untalented Donna Wilkes. Wilkes played the student by day, hooker by night without any emotionally intensity. This left the original movie with the feeling that Disney was trying to create a family-friendly Grindhouse movie. Then again if Disney had a hand in that production, maybe the production value would be much higher. “Angel” is eventually taken off the streets with the help of a cop.

Despite what it sounds like, this did not originally air on Lifetime.

The sequel kicks off with Angel cleaning her act-up, by hitting the books instead of the streets, and now played by the beautiful Betsy Russell, who is probably best remembered for riding a horse topless in “Private School.” The former cop that helped her is shot to death by the mafia, because he was in the wrong place at the wrong time. Now, Angel must put the high heels and tight pants back on to search for truth, justice, and the American way.

This premise has worked dozens of times in the exploitation world, but the problem with this film is the annoying, over-the-top supporting characters. Rory Calhoun plays the obnoxious, mentally unstable former cowboy/stuntman, Kit Carson. Susan Tyrrell (“Night Warning”) plays the angry, lesbian, that serves as a testament to lousy acting. But the worst supporting actor has to be Barry Pearl as Johnny Glitter. Pearl’s acting is so bad that it has to be seen to be believed.

What is even more perplexing is how this film managed to score Ossie Davis in the cameo role of Captain Harry Moradian. One can’t even imagine why an actor of Davis’ caliber would appear in a B-movie this bad. Luckily, his appearance was brief and many people often forget he was even in this film.

The only asset to the film is Russell, whose beauty keeps your attention on the screen. She also has a knack for light comedic roles, and is the reason this sequel is better than the abysmal original.

However, there are times when the slapstick comedy is out-of-place in a movie that is supposed to be about a hooker. The comedy removes you from the grittiness and that becomes a real problem for this picture. An early scene of them trying to get Carson out of the mental hospital, falls flat on delivery. In other words, this is bad movie making at its finest, which is an oxymoron in some ways. But there is an audience for this type of trash and they will eat it up with a smile on their faces throughout the short running time.

Now, the climax of “Avenging Angel” reaches an all-time low, even for people who can turn their brain off briefly to enjoy a B-movie. An intense shoot-out between the mafia and Angel’s gang of misfits in an abandoned apartment building leads to an outlandish ending. The mafia managed to kidnap a baby for a trade-off with someone from the crime-family that Angel and friends have kidnapped. When the deal goes wrong, the baby is let loose, falling several stories to the ground floor, however Carson manages to catch Little Buck just in time.

What on Earth was the writer thinking, when he concocted this piece of drivel?

This film was followed by two more sequels (surprisingly), including the slightly improved “Angel 3,” which featured Mitzi Kapture (“Silk Stockings”) in the role of Angel, and Richard Roundtree in a decent supporting role. The first three films in the series were released by Anchor Bay in a boxed set. However, “Angel 4” featuring Darlene Vogel in the role was never released on DVD, which left viewers curious has to why Anchor Bay snubbed the final film.

“Avenging Angel” works best when you are open-minded to just how funny lousy film-making is, and while you won’t be laughing at the comedy on the screen, you will be chuckling at an atrocious piece of cinema. What is great about this picture is that if you scratch the surface to find a deeper meaning, you will come up with nothing.

How often do you come across a movie that serves no purpose at all, except as a study in inept film-making?

This weekâ€™s episode of Impact Wrestling featured a trio of solid matches, but plenty of storyline development that will surely...