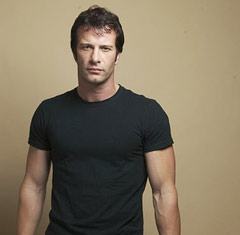 Last week’s episode of â€œHungâ€ was a good one for one simple reason: variety.

Not only did it give us a wacky sex scene, that proves Thomas Jane has no shot at ever appearing on â€œAmerican Idol,â€ it continued to develop every other storyline on the show and give the viewer enough drama and action to get a feel of what direction the show is headed in the rest of the season.

By all indications, it’s going to be a bumpy, but steamy ride.

For one, the problems in Ray’s family seem to only be getting worse as Damon’s escapades at two am, which include walking all over the neighborhood and for some reason, peeing on home-plate on the school’s ball field, combined with Darby’s problems with her weight, only seem to be getting worse. After attending a poetry reading with his father and Tanya, it’s easy to see that this kid is a lost soul, swimming in a fish bowl. Does he need to spend more time with his father? Or does he need to just man up and try to find his place in the world? Either way, it’s going to be interesting to see what happens with his character.

When this show originally started last year, this was the kind of entertainment many were expecting. While the premise and the name alone make you think you should be ready for a sexy, sultry affair, this show doesn’t have to be laden with sex scenes to be entertaining, especially with the talent on-screen.

This episode proved that.

As well, for one of the first times in the show’s history, Ray isn’t the only character that you can truly connect with, as the problems facing many of the characters are ones that everyone has had to deal with before, making it fun, sad, relate-able and quirky, all at the same time. With this foundation set, it might be fair to say that â€œHungâ€ is primed for a solid second half run.