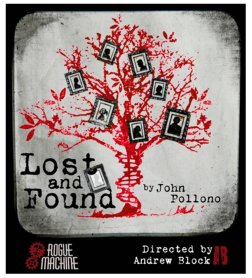 New York: Fresh off of his run at Primary Stageâ€™s Secrets of the Trade, Bill Brochtrup (â€œNYPD Blueâ€) will take over the role of â€œAlexâ€ in John Pollonoâ€™s sold out and critically acclaimed Fringe hit LOST AND FOUND, as it begins a run at the historic Lucille Lortel Theater (121 Christopher Street) as part of the Fringe Encores Series (September 18- 25). Tickets are $18, and are available at 866-468-7619 or www.FringeNYC-EncoreSeries.com.

LOST AND FOUND is a brutally funny and poignant story about a Boston family of cops whose lives are thrown upside down when a mysterious stranger appears on their doorstep, forcing them to confront issues of love, grief, homophobia and regret.

The critics have raved: FRINGE PICK! “Keeps a steady stream of wisecracks and plot twists swinging through the kitchen door.” â€“ Wall Street Journal; “A gem of a play… writing is exquisite… sophisticated humor and fascinating characters… should be shared with as many people as possible.” â€“ ELJNYCOff-Broadway; “My Fringe favorite… the performances were magnificent and I was deeply moved [to tears] by this fine new play …” â€“ eMusings; “A profoundly moving rumination on loss, regret, and grief… Simultaneously heartbreaking and hopeful…” – NY Theatre; “The cast is arguably the best in the festival… living, breathing characters… compelling… truly great theatre…” -Â  Hyreviews.com; “Touching and volatile. Through gritty dialogue, the play is a testament to the vagaries of love and regrets for the might-have-been…” â€“ Backstage; “Profoundly moving… the entire ensemble is well-cast and seamlessly inhabits these Boston folk… unforgettable.”– CurtainUp; “Burns with amazing performances… the space can barely contain the characters… full and engaging… the writing is excellent.” – Reviews Off Broadway; “You won’t be disappointed, and you certainly won’t be bored… If family dramas are your bag, you should make it a point to see this show.” – Theatre Is Easy; “…vault to the top of your Fringe list.” – Showbusinessweekly.com.

The Lucille Lortel Theater is located at 121 Christopher Street

For more information on LOST AND FOUND please visits www.LostandFoundplay.com.

For Images for Lost and Found please click here

Mr. Pollono, Mr. Block and the cast are available for interviews. To arrange interviews or press seats please contact Springer Associates PR at 212 354 4660

John Pollono (playwright) is a founding member of Rogue Machine Theatre in Los Angeles.Â His plays have been produced at the Barrow Theatre Group, Ivy Substation, Theatre/Theater, Theatre Unlimited,Â  and Rogue Machine.Â  Most recently, his play Illuminati won Best Play at the 2010 Network One-Act Festival in New York City.Â  As an actor, John has appeared onstage recently at the Odyssey Theatre in The Chicago Conspiracy Trial (LA Weekly Award Nominee), A Small Tragedy and in the West Coast premiere of Half of Plenty at Rogue Machine. He can be seen in upcoming feature film FORT McCOY.Â  John is a proud member of the Dramatistâ€™s Guild and the Actorâ€™s Studio Playwright Unit.