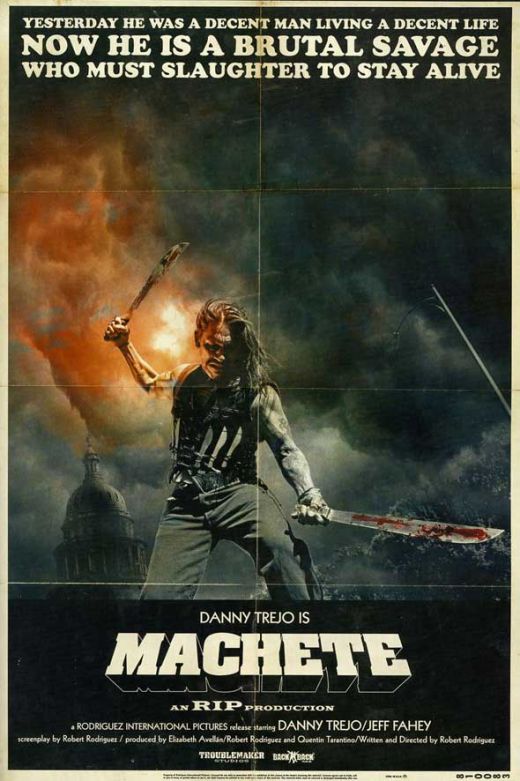 Like an intense massacre of body parts getting sliced and diced, it is safe to say that “Machete” is the ultimate grindhouse film.Â A strong stomach will get weakened by how gory this movie is- the killings that take place are insanely sickening and realistic.

“Machete,” played by Danny Trejo [“Desperado”] is out to get revenge after his family was killed by a Mexican drug lord. Even worse, the guy was also hired to take out a corrupt senator and gets set up in the process. That alone starts an enticing journey of brutality.

Writer and Director Robert Rodriguez creates an intriguing story here that is polished and features a script fit for each character. There are many cool action scenes that will have you cheering throughout as well, one of which was extremely violent and disgusting that youâ€™ll be holding your stomach, hoping you would never have any problems with your intestines, literally.

What was so great about this film was that it was unique, it’s actually based on a movie trailer and idea that Rodriguez had while filming â€œDesperadoâ€ about fifteen years ago. It is impressive to stick with a story, for not just a movie, but a character, for a long time and have the outcome ultimately be satisfying and eccentric.

Cheech Marinâ€™s character as a priest was one of the highlights of the film. He was comedic, drew a lot of laughs. Not to mention, he wasnâ€™t afraid to kill either. It is rare that you see a priest come out with shotguns and take out the bad guys in style the way he did. Jessica Alba was absolutely gorgeous and a major reason why you should see this film as well. There are several scenes that will make your jaw drop to the ground; she’s that hot,

Trejo was well deserving of a lead role in a film. He did a tremendous job portraying a macho vigilante who made a machete look like the most dangerous weapon in the world. Not to mention he looked damn cool doing it.

The film’s cast is far from perfect however, as Steven Segal’s role, albeit limited, was atrocious.Â  His Mexican accent was not only a joke, it was like nails scratching a chalk board as well. Out of all the Robert Rodriguez films, Segal had to be the worst villain. Luckily this did not break the film.

Overall, â€œMacheteâ€ was a fun action flick with people loosing limbs left and right, cars and houses blowing up and a bunch of sharp objects being thrown at people who got in Macheteâ€™s way.

No one said Machete will have mercy on his enemies, but when a beautiful woman in Alba decides to come along for the ride, you bet heâ€™ll make an exception.

Make no mistake, this isn’tÂ  just another trip to the Grind House. The question is, are you gutsy enough to experience this for yourself?

With blood guts and beautiful women sprinkled throughout, it’s worth the price of admission.

When the first trailer for â€œMacheteâ€ turned up in 2007 as a kind of joke during the first reel of â€œGrindhouse,â€ the title at the end promised itâ€™d be rated X. Although it wound up getting an R rating (there hasnâ€™t been an official X rating in 20 years, as a matter of fact), â€œMacheteâ€ manages to push it to its knife edge â€“ not only is this a film where the hero decapitates bad guys and rescues a sexpot who wears not a stitch of clothing, but he does it all before the opening credits.

Not that anyone wouldnâ€™t have guessed itâ€™s a Robert Rodriguez film anyway.

This isnâ€™t one of those films where the director is the main attraction, though. (Besides, Rodriguez co-directed it with Ethan Maniquis.) It comes with one of the most worthwhile casts heâ€™s ever had, and for as unlikely a star as Danny Trejo is, he provides the movie with the fulcrum it needs. As Machete, an ex-Federale who hung up his blade for the simple life, Trejo comes across as a strong but quiet everyman, though thereâ€™s an insider for the U.S. government (Jeff Fahey) whoâ€™s got bigger plans for him.

He hires Machete to assassinate Sen. McLaughlin (Robert De Niro), whose anti-immigration stance hurts Americans and Mexicans alike. He even throws in $150,000 to sweeten the deal â€“ but Machete makes it clear that he isnâ€™t in it for the money.

When things on the McLaughlin hit donâ€™t happen as planned, Machete discovers heâ€™s part of a grander scheme, one that gets him more than heâ€™d bargained for. At the top of the whole thing is drug kingpin Torrez (Steven Segal), who left Machete for dead years ago and is eager to finish the job. North of the border, naughtiness takes the form of Lt. Stillman (Don Johnson), whose pride in gunning down illegal aliens is such that he documents everything with a camcorder.

Not many people are in Macheteâ€™s corner, although theyâ€™re more resourceful than they look. For starters, thereâ€™s Luz (Michelle Rodriguez), whoâ€™s not only an underworld queen, but assumes an alter ego named She, whoâ€™s just as unstoppable as he is. Thereâ€™s also his clergyman brother, Padre (Cheech Marin), whoâ€™s got something a lot stronger than frankincense smoking up his office. The only normal person in the entire movie is an immigration officer named Sartana (Jessica Alba), but even sheâ€™d seem out of place in the real world. (Try to remember the last cop you came across who had a body like that.)

Of course, some of these roles are all too believable, like the drug-addled hell raiser Lindsay Lohan plays. Her performance is as good as anyone elseâ€™s here, and although Rodriguez treats his cast like a bunch of second-rate actors, they understand that thatâ€™s what gives this material its appeal.

Itâ€™s nice to see a self-aware action film with brains, even one with lots of bullets blowing them to bits.