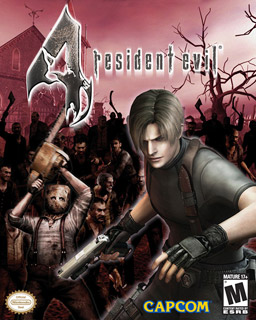 Ever since the video game industry became permanently entrenched in American and Japanese pop culture in the 1980s, gamers have been scared out of their minds playing them. For every Mario, Donkey Kong, Spyro, Crash Bandicoot and other cute plumber or animal hopping around collecting coins, there has always been games like Castlevania, Ghost and Goblins and Resident Evil titles that made us scared to shut off the lights. This Halloween Review Fix does the unthinkable and embraces the games that scare the be-Jesus out of us and counts down the five scariest games of all time.

10- Loaded [Playstation, Saturn, 1996]-If trying to escape from a mental institution filled with lunatics wasnâ€™t bad enough, you were forced to play as one. Also add in the fact that this was probably the bloodiest game of all-time and you can figure out why many kids were forced to stay away from the game when it was originally released.

9- Left for Dead [360, 2008] One of the most fun multi-player shooters is also one of the scariest. Do not get low on ammo, or else youâ€™ll face a brutal death. Nothing beats a zombie shooting its tongue at you.

8- Condemned: Criminal Origins [360, 2006] The dark and eerie setting is brought to brutal reality as there are so many ways to kill enemies. Ever want to hit a crazed hobo over the head with a crowbar? Hereâ€™s your chance.

7- Doom 3 [Xbox, PC 2003] This game essentially is what â€œJason Xâ€ would have been if it was a video game. Bloody, brutal, fast-paced, itâ€™s one of the best first-person shooters on the Xbox.

6- Silent Hill [Playstation, 1999] While it wasnâ€™t on the same level as the Resident Evil series, the haunting score added to the crazy amount of bloodshed and amazing-looking monsters.

5-Manhunt- [Xbox, Playstation 2, PC, 2003]-Underneath a fun stealth action game was a violent and bloody massacre that only players with strong stomachs could handle. Being hunted by your fellow man is probably one of the scariest things imaginable, but gamers could always find a blunt object and pummel their enemies or find a plastic bag and suffocate them, effectively turning themselves into blood-thirsty monsters while playing. However, the scariest thing about Manhunt was that your enemies usually did it first.

4- The Suffering- [Xbox, Playstation 2, PC, 2004] Combining the prison element from Loaded and the gruesomeness of Manhunt, The Suffering was a tour-de-force on scare-o-meter. Despite having some of the craziest looking enemies in any game ever released, insane flashback scenes that made the protagonist relive his own worst nightmares made The Suffering feel more like a really scary movie than a bloody video game. The lights definitely stayed on while playing this one.

3- Resident Evil- [Playstation, 1996] Câ€™mon, you had to feel this coming. Even to this day, despite the clunky controls and blocky graphics, Resident Evil is without a doubt the scariest game of all time. If it wasnâ€™t those damn zombie rottweilers jumping through windows, it was that blasted zombie eating out one of your comradeâ€™s brains within the first few minutes of the game that scared the heck out of you. Also, a great soundtrack added suspense to the game and proved that people could become scared at the thought of playing a video game.

2- Dead Rising- [360, PS3, 2006] The guys at Capcom have studied their George Romero and zombies, because â€œDead Risingâ€ takes you on a ride that can only be compared to one of Romeroâ€™s films.

1- Resident Evil 4 [PS2, GC, PC, Wii, 2005] The changes made to the control scheme for this game allowed Capcom to make a truly one of a kind game that is without a doubt the scariest game ever. Running for your life from falling boulders and berserk villagers is one thing , but giants with chainsaws is another.

Now that you know which games to stay away from this Halloween, whatâ€™s stopping you from dusting off these gems and playing them? Halloween may be mostly concerned with scary movies and tons of candy, but these games provide an aura of fright and suspense that canâ€™t be found anywhere else.

Check out this weekâ€™s 205 Live Power Rankings to see who's ready for this week's Great Balls of Fire event....