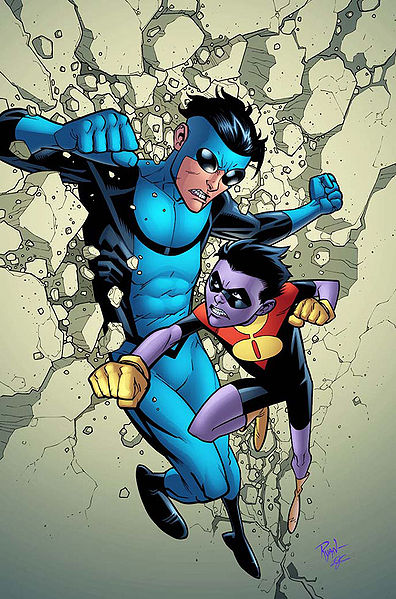 Robert Kirkman may be the king of zombie comic book writing, penning such classics as â€œMarvel Zombiesâ€ and â€œThe Walking Dead,â€ but one of his â€œotherâ€ works, â€œInvincible,â€ plays with your prototypical super hero story by inserting humor in all the right places.

The complete opposite of â€œThe Walking Dead,â€ the first volume of â€œInvincible: Family Mattersâ€ is a graphic novel that provides a sneak peak into the world of Mark Grayson. Like your average teenager, Grayson goes to school and works at a local burger joint.

However, he is a bit different.

Aside from going to Reginald V. Johnson High School, [Yes, the name of the actor who played Carl Winslow on â€œFamily Matters.â€ Even the principal of the school bears a stringing reference to the former television star] his father is not only an alien, heâ€™s also Earthâ€™s greatest superhero, Omni-Man.

Beautifully told, Kirkmanâ€™s conversational writing style, one that has served â€œThe Walking Deadâ€ series extremely well over the years, is on full display here. A quick read as a result, the first volume of â€œInvincibleâ€ is something you wonâ€™t want to stop reading. With a story such as this, with Kirkman creating his own Superman and Superboy of sorts, so many things could have gone wrong. The series could have gone against the grain and created emotional conflict between the father and son or even taken things even further by having the younger Grayson be a villain. By keeping the story light and making it more of a coming of age tale with a character that everyone [mainly teenage boys] can relate to and enjoy, the first trade in the series shines.

While itâ€™s not quite â€œKickass,â€ itâ€™s exactly wholesome either. The main plot of this trade throws around themes of teenage love, maturity, but possesses a villain that enjoys turning teenagers into live bombs, before blowing them up in public places.

Combined with the art of Corey Walker and Bill Crabtree, this series has a cinematic feel that makes it accessible to any comic book reader. Colorful, â€œInvincibleâ€ resembles the look and feel of a Saturday morning cartoon. With a nice combination of full-page action and semi-developed panels, many where charactersâ€™ eyes resemble black dots, itâ€™s fair to say Walker and Crabtree enjoy the art in the â€œTeen Titansâ€ cartoon. Rather than deliberately emulating however, they manage to deviate enough from the mainstream and create images that are solid. At the same time, even if they are comparable to many things weâ€™ve seen before on TV and in the medium, itâ€™s hard to deny that they manage to blend extremely well with Kirkmanâ€™s story.

Overall, â€œInvincibleâ€ is a comic book example of beauty by simplicity, the writing and art of this team doesnâ€™t try to be trendsetters; they simply tell a story.

And a damn good one at that.

That, essentially, is what makes this trade so much fun.