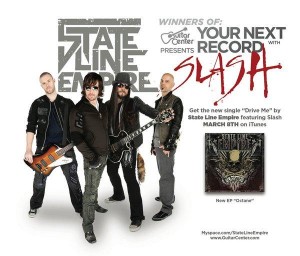 Slash, on the heels of his recent stellar solo effort, has collaborated on a new single â€œDrive Meâ€ with State Line Empire, a band that won Guitar Centerâ€™s â€œYour Next Record with Slashâ€ contest. The track, one of a four song EP, was part of a search for talented unsigned artists. It does not disappoint and is a breath of fresh air in this era of â€œAmerican Idolitisâ€ (Take two aspirin and call a doctor in the morning).

This San Mateo California bandâ€™s maiden effort, which was produced by Mike Clink (Guns and Roses, Motley Crue and Megadeth) is a hard driving rocker that immediately takes off with Slashâ€™s searing guitar line that rocks along with Tyson Yen’s self-assured, yeoman vocals and the bandâ€™s tight rhythm section (Dave Pearl on bass and Jay Michaelis on drums) that complements the frenetic pace of the track. In addition,the vocal refrain contains tight, solid harmonies that make this more than a run of the mill rocker.

Slash, aka Saul Hudson, has emerged after the demise of the original Guns and Roses to become a viable musical force with the aforementioned â€œSlashâ€ (see this website) and the reliability of his guitar work. Slash has never sounded better than on this new track. From the outset, he reels a listener in with his screaming, crying guitar styling and his solo is pure guitar magic. His runs are lighting fast and tasteful at the same time with a clearly defined, warm tone. The guitar fade out that closes out this refreshing effort has to be heard to be believed.

If this new song, which was recorded at the Village and East West Studios in Hollywood, is any indication of what to expect on State Line Empireâ€™s EP, then we are all in for a treat. â€œLet it go, one time,â€ Yen laments as he tells a tale of romantic agony and ecstasy, which is a back drop for a kick-ass rock and roll odyssey.

â€œWWE 2K16â€ will feature a new submission system, brand new commentary, an updated creation suite and more characters than ever...