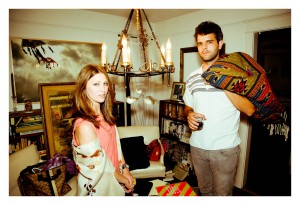 Coyolâ€™s latest single, Pharmacist, is an indie/folk song full of metaphor and real life issues that often plagued the streets of Los Angeles, as well as connects to the experiences of Coyolâ€™s own Watters, who places his own issues of insomnia and anxiety disorder into the heart of the lyrics. â€œGive me a pill to pop/I need a pharmacist/I need a surgeon for my mind/Thereâ€™s all these images and video footage/stuck in rapid, rapid rewind.â€

The song is a great track and starts with the strumming of a guitar, and follows with the strong vocal and lyrical first verse. The band has a hit on their hands with this song. The alternative/indie/folk style makes the sound new, fresh, and different, but also something familiar, for they tend to offer a hint of Fleetwood Mac into their dynamic.

Overall, the instrumentals such as the acoustic guitars, along with the bands interest to draw out the realities of pain and emotion, and turn it into a song, make this a great track for Coyol.

“Pharmacist” is a hit.