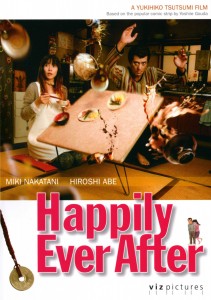 It is rare that comic strips ever get anywhere past the newspaper, let alone get a movie. Yoshiie Goudaâ€™s â€œHappily Ever Afterâ€ is one of those rarities that make to the big screen. Bolt your table to the floor because this oneâ€™s going to hurt.

The comic strip is about a married couple, wife Yukie and ex-yakuza and unemployed husband Isao, where the punch line is Yukie saying or doing something to Isao that makes him mad enough to flip over their dinner table. Everyone tells Yukie that she should leave Isao, but she loves him so much because he saved her life once upon a time. Director Yukihiko Tsustumi took that story and added a semi-love story between Yukie and her employer and an â€œIâ€™m pregnant, honeyâ€ story into the mix for the film.

â€œHappily Ever Afterâ€ is labeled as a dark comedy. The dark part is most present in that Yukieâ€™s father is arrested at the beginning (later theyâ€™re reunited). Isao spends all of his time and Yukieâ€™s money on pachinko, and Yukie had a troubled childhood. The comedy part of this equation is the iconic Isao flipping over the table; only here itâ€™s shown in Matrix style slow motion. Not mention the sound effect used when Isao head-butts people is more laugh-inducing than painful. The main leads do a good job portraying their characters. Miki Nakatani (Ringu 1 and 2) plays the devoted, but airheaded wife well, and Hiroshi Abe pulls off the constantly angry ex-yakuza who rarely talks role just as solidly.

The story isnâ€™t much to write about and this is where the movie falls apart. Itâ€™s your basic love conquers all story with a tragedy thrown in the second half thatâ€™s supposed to show how much Isao really loves Yukie. The second half, where Yukie has flashbacks of her childhood and how she met Isao, is the weakest part of the movie. It completely stops the film cold, drags the story, and seems out of place. These flashbacks do show how Isao saved Yukieâ€™s life, but at this point, itâ€™s way too late in the movie and feels like it was thrown in at the last second. It takes you out of the story and makes you look more at your watch than the movie.

Itâ€™s hard to recommend this movie. The actingâ€™s good, the story sounds interesting and the actors do a very good job. The poor second half and lack of any actual comedy makes â€œHappily Ever Afterâ€ a rental only for those who enjoy foreign films. Everyone else can do much worse. While itâ€™s not the worse foreign movie ever made, but it doesnâ€™t make good on its potential.