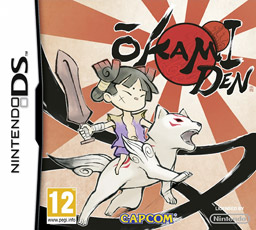 Clover Studios created some well-loved video games before they went defunct in 2007. One of these titles was the much loved Okami on the PS2 back in 2006. Okami won several awards from various publications including best of E3, four game of the year awards, best adventure game, and best character design. The game was later re-released by Capcom on the Wii in 2008. A sequel, called Okamiden, was announced in 2009 to much anticipation. Does Okamiden live up to the fansâ€™ expectations?

Okamiden takes place nine months after the events of Okami. A new evil has befallen the land of Nippon and Issun, Amaterasuâ€™s (Ammy) partner in Okami and celestial envoy, notices that people have once again stopped worshiping the gods. Enter Chibiterasu (Chibi), Ammyâ€™s son. Chibi must now travel across Nippon in search of the source of the new evil and bring peace back to Nippon. Chibi is not alone though. He is accompanied by new partners such as Kuni, the son of Kamiki Villageâ€™s â€œlegendary heroâ€ Susano and sake brewmaster Kushi. The story does start off strong, but it does lose some steam at the midway point. It then picks up the pace and ends on a very high note.

Though not as memorable and exciting as Okamiâ€™s story it is still an enjoyable story.

The gameplay stays the same as in Okami: Zelda- esque action adventure exploration style gameplay with the gameâ€™s main gameplay innovation: the celestial brush. Many brushstrokes return in Okamiden such as the Power Slash, Rejuvenation, and Cherry Bomb. On the DS, using these brush strokes are a lot easier and feel much more comfortable than in the PS2 or Wii versions, due the stylus pen working just like a paintbrush. Okamiden has added a new gameplay mechanic with the partner system. Each partner has their own unique skills and abilities that you must use in order to advance the game. Usually, you must guide these partners to certain treasure chests that they are only able to get to which may annoy some, but it gives new depth to gameplay. There arenâ€™t as many side quests as in Okami, but the ones that are there are your basic item hunting for certain characters variety. The best one is the new village, where you must travel across Nippon telling people to go live there in order to expand it. This side quest was a lot of fun and completionists will have a blast with it. The only problem is that Chibi is not as powerful as his mother. For example, he canâ€™t swim, does not have a divine shield, and he ink pots do not refill on their own. This can be forgiven in that obviously Chibi is still a puppy and the child is usually not as powerful as the parent.

The music and graphics are the biggest letdowns in Okamiden. The graphics in Okami is one of the main draws of the game. Gone are the beautiful landscapes that look like Japanese scroll paintings and are replaced with low-res graphics that look similar in style, but donâ€™t stand out as much. Ultimately, it loses that sense of awe the first game created. This must be due to the DSâ€™s graphical limitations. The music isnâ€™t as memorable either. Some of the original music does return, but the new music just doesnâ€™t have the same impact the original and many tracks are forgettable.

Is Okamiden a good game? Yes. Is it as good Okami? No. Will it be as loved as Okami? Probably not. Is it worth the time and money to play? Yes, but donâ€™t expect the same level of greatness as Okami.