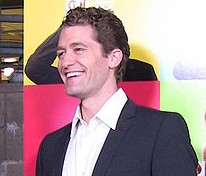 Matthew Morrison, most famously known for his role on the hit series, “Glee” is also no stranger to Broadway. He’s a Tony Award nominee, and reminds the world that there is more to him than the Glee club with his latest tracks.

“Mona Lisas and Mad Hatters/ Rocket Man” is a fantastic duet with the great Sir Elton John. It is a medley between a Morrison song, and a John classic, which makes for a great soft rock adult contemporary ballad. Both male vocals intertwine with grace and perfection. This collaboration will prove that Morrison will continue to have a musical career outside of the Glee club, and that Sir Elton John is timeless, spanning generations. Rocket Man’s infusion with Mona Lisa’s and Mad Hatters is creative, and definitely hits a high note.

“Summer Rain” is a fun, pop track that is will remind you of Jason Mraz’s sound. It has a fun hook, and a very catchy chorus. This sounds like it could be a playful summer anthem this year. Its a great tune that when played, will bring you back to the memories of a summer love, a cool breeze, and of course, the rain.

Overall, Morrison not only has acting chops, he’s also got a voice. His tracks are currently available on I-Tunes. Morrison can also be seen weekly on Fox’s hit, “Glee.”