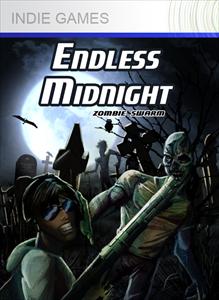 Zombies are totally in right now.

The Walking Dead is one of the best-selling comic books around, Max Brooks’ best-selling book, â€œWorld War Zâ€ is getting a movie treatment and â€œYear Zeroâ€ got rave reviews at this yearâ€™s Tribeca Film Festival; itâ€™s as if anything zombie-related can do no wrong.

Well, not exactly. Ever since zombies became entrenched in American pop culture, there have been amazing work based on them, but a plethora of crap as well.

For every â€œDawn of the Dead,â€ there have been a dozen B-movies that use zombie-inspired work to make a cheap buck.

Luckily, in the world of video games, zombies usually come out on top. From â€œZombies Ate my Neighborsâ€ to â€œResident Evil,â€ the undead will always have a home on video game consoles.

Jordan Trudgettâ€™s independent game on the 360 Live Arcade, â€œEndless Midnight: Zombie Swarm,â€ continues that legacy. Inspired by classic games such as â€œLoaded,â€ Robotronâ€ and â€œSmash TV,â€ this simple, yet difficult and bloody shooter is more than worth the measly 80 Microsoft points.

Gameplay is straight-forward and eerily similar to the aforementioned classics in the fact that you simply run and shoot, while avoiding enemies. However, what sounds easy enough is terribly difficult as you move forward. As the game continues, the waves of the undead get larger in size. Eventually, tougher, faster zombies join the fold to spice up the action. After each level, you can trade in the cash you get for killing zombies [yeah, itâ€™s weird, but who cares] for better weapons, health packs and firepower upgrades.

While this system isnâ€™t the most depth-filled, this game isnâ€™t about that. Itâ€™s about fun, old-school gameplay mechanics that challenge your hand-eye coordination in ways that many new games canâ€™t.

Once you get to about the 25th wave of enemies, if you can keep up, youâ€™ll reach a zen-like state. Your eyes will blur and youâ€™ll simply react on instinct, mowing down hordes of flesh-eating ghouls with everything from a magnum to a rocket launcher.

This is where the game shines and tests the strength of every gamer that plays it.

Considering the simplistic nature of the title, the game should run without a hitch, right? Not really. At times, the basic sprites that plague the screen get sick with a case occasional slowdown. However, it never gets to the point where itâ€™s inhibiting your ability to play the game. Instead, itâ€™s more like a slight annoyance than a full-blown problem.

Regardless of these small hitches, â€œEndless Midnight: Zombie Swarmâ€ is an enjoyable title that is perfect with friends and in between long runs of more complicated and modern titles. In the end, its simplistic gameplay is made up for with solid difficulty and trendy subject matter

Itâ€™s also less than two bucks. In todayâ€™s video game world, you canâ€™t ask for more than what youâ€™re getting here.