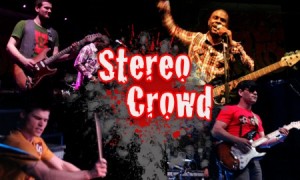 Up and coming, urban alternative group, Stereo Crowd’s new music video, “I GOT IT,” ft. Ava, SciryL and Patty Cakes, begins with a comical introductory skit of a sit down taking place between artist and record company. As the big boss, and legendary music executive Barry Bergman, claims he know what sells (white rappers, and hip hop artists who play instruments).

Stereo Crowd’s VFerg simply replies “I Got it.”

Cut to the fast-paced, hip hop/rock track that showcases artists with instruments and even white rappers, this is the latest craze for the upbeat house party, and city club dweller, as it is fun and infectious with music meant to bring in crowds of loyal fans.

The video’s quick-paced scene changes depicting New York City and its influence on music will have fans turning up the volume to sing and dance along. The scenes coincide well with the lyrics, wonderfully connecting with the theme, mood and tone of the song-The video’s director, Ali Powell should be proud. Their mission to infuse musical genres and diversity with this next generation of urban sound has been accomplished.

The raps, lyrics, and rock infused electric guitar instrumentals, are well done on this track and will speak volumes, as it will sound as if these new artists have been on the scene for years. Its safe to say Vferg, Paul-Anthony, Robert, Jamie, as well as their featured artists on this track, indeed “Got it.”