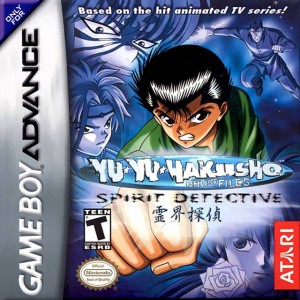 Ask any anime fan about video games based on the medium and they will tell you they are either mediocre or horrible to the point of unplayable.

The story is about Yusuke Urameshi, a high school juvenile delinquent whoâ€™s always skipping school and getting into fights. One day, he saves a little boy from being run over by a truck and he gets hit and dies. Botan, the seriesâ€™ grim reaper, tells him that he was not meant to die and that he has a chance to come back and become a spirit detective for the spirit realm. The series then turns into a fighting anime with nothing but fights every episode. This game follows the first season of the anime: The Spirit Detective Saga.

As with any game based off an anime, we see all the usual suspects from the show, such as Yusuke, his rival Kuwabara, the half-demon Kurama, and the fire demon with the third eye, Hiei.

The game is a top-down adventure style game where the majority of the gamplay is fighting off enemies with an added leveling system that doesnâ€™t seem to have any use except for gaining for HP. The game is marred by a bad fighting system thatâ€™s basically mash the attack button until the enemy with the horrible AI dies and drops pellets that act as experience points. Once you get Yusukeâ€™s Spirit Gun, then all you need to do is shoot at the enemies from a distance and run away when they come close. The only reason to use the other characters is because there are boss battles where you need to control a certain character. Each character may have three special attacks, but one is all you need because all the attacks do the same amount of damage.

This is as boring as it sounds.

Also, Hiei is useless. His special attacks are the same teleporting technique with some slight variation. You can complete the game without ever using him. Itâ€™s a pity because Hiei is such a great character on the show and he has some of the best fights. Pity he was put in so that all four characters can be present.

The graphics are pretty bad, too. They look jaggy, boring, and are an undeniable eye sore. This may be a GBA game, but there are some games on this console that have great graphics. Not to mention all the sprites look the same and have the same animations. The backgrounds are poorly done and look like generic 16 bit levels that can be found anywhere.

Yu Yu Hakusho fans can do a lot better. In fact, the makers of this game couldâ€™ve done a lot better. Fans of the series should just be happy with the manga and the anime because this game will not be any fans household.