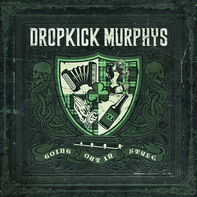 The complete band lineup has been revealed for the September 8 and 9 Dropkick Murphys at Fenway with Special Guests The Mighty Mighty Bosstones landmark hometown shows at Bostonâ€™s Fenway Park, home of the Red Sox.

For both shows, the main stage will feature headliners Dropkick Murphys, special guests The Mighty Mighty Bosstones, as well as Street Dogs. The side stage will be headlined by Chuck Ragan and will include performances from The Parkington Sisters and Old Brigade.

As previously announced, 18,000 tickets for the Fenway Park shows sold out in just 45 minutes. A portion of the proceeds from the two Dropkick Murphys at Fenway with Special Guests The Mighty Mighty Bosstones shows will benefit the Massachusetts 9/11 Fund–which helps support families of victims of 9/11 throughout the state–as well as the bandâ€™s charity The Claddagh Fund (www.claddaghfund.org).

In October, DKM head west for a handful of shows with openers Swinginâ€™ Utters before departing for a weeklong run of newly announced Australian tour dates with Lucero opening. (See below for full tour itinerary.)

The current Dropkick Murphys tour dates are as follows: