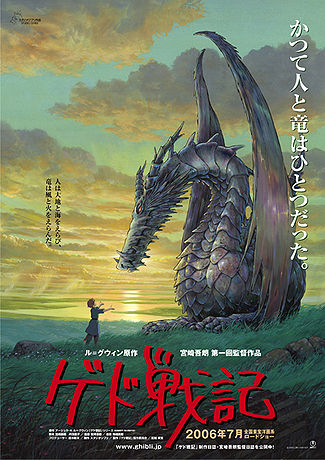 Ursula K. LeGuinâ€™s Earthsea series is one of the most popular fantasy series of all time. Many fans have wanted an animated adaptation of the books for years. After the disappointing SyFy Channel original movie Legend of Earthsea fans were beginning to feel one wasnâ€™t going to be made. Luckily, Studio Ghibli answered the call back in 2006 by releasing an original story, which tookÂ  place in Earthsea called “Tales from Earthsea,” directed by Hayao Miyazakiâ€™s son, Goro.

Is this the Earthsea movie fans wanted?

In” Tales from Earthsea” there are bizarre happenings across the world, namely poor crops and dragon sightings (Earthsea dragons normally stay clear of humans). Ged, Earthseaâ€™s main protagonist and now archmage, decides to investigate these strange happenings. He meets Prince Arren who has murdered his father, has a magical sword he canâ€™t wield. Obviously, he has a dark side to him. The wizard Cob sees this as an opportunity to use Arren to get rid his old enemy Ged. We also meet two other iconic characters from the Earthsea canon: Tenar, the former priestess of Atuan and Theru, a young girl who is in Tenarâ€™s care.

Some people may be disappointed that Ged is not the main character. This actually works more to the movieâ€™s credit in that Studio Ghibli can create an original story using an original character without destroying canon. The characters mention events that happened in the books which will confuse people who have not read them. However, that is not a problem when the film isnâ€™t all that interesting. The narration is very slow and slogs along for 115 minutes. Ged, a character that should be the most interesting character, isnâ€™t. Heâ€™s just there. The only character with any character is Arren, followed by Theru. It seems Studio Ghibli only focused on these two characters while the other characters are merely background.

Itâ€™s not bad, but the story couldâ€™ve been a lot more interesting.

The plus side is the animation everything you expect from Studio Ghibli. It is beautiful, very colorful, and the character designs are very appealing to the eye. Thatâ€™s one of the reasons are attracted to Studio Ghibli films: the animation some of the best youâ€™ll ever see.

Tales from Earthsea may not be as horrible as the SyFy channel disaster, but it is neither the movie fans have waited for. Both fans and non fans should only consider renting the movie. Tales from Earthsea just doesnâ€™t live up to the great Studio Ghibli films such as Princess Mononoke or My Spirited Away. Itâ€™s not terrible, just not very interesting and Earthsea definitely deserves the recognition it deserves.