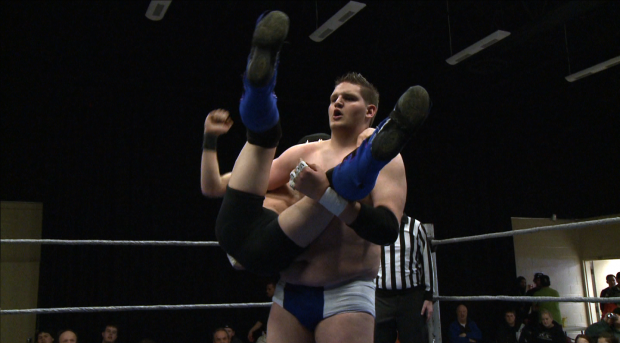 A few years ago, Travis Nieken wasnâ€™t very different from many other teenagers around the world that loved professional wrestling. However, after attending Extreme Canadian Championship Wrestlingâ€™s training school and appearing in Stephen Gillisâ€™ documentary, â€œThis Wrestling Life,â€ Nieken appears to be on the fast track to making his dreams of professional wrestling superstardom come true.

Discussing his young career and the documentary with Review Fix, Nieken shares his thoughts on the industry, his moveset and his future.

Review Fix: How did you feel when you were originally spoken to about the documentary?

Travis Nieken: I felt very excited when I was approached by Stephen and he talked about it with me. I mean, if you were able to have a documentary about you and doing what you are inspired to do, I think you’d be pretty excited too. It was new, different and very interesting as well- just because I had to live life with a camera around me while I was doing what I had to do.

Review Fix: You come off very brash at times in the documentary. How much of that is you and how much is that a show for the camera?

Nieken: It was pretty much just all for the camera. Kind of showing off what my characterâ€™s personality is like- what I wanted. I’m not brash at all, or at least I’d like to think that.

Review Fix: How do you think you’ve changed since then?

Nieken: Honestly, I haven’t really changed all that much. I finally stepped up to the challenge and took my opportunity to start training and now I am doing what I love.

Review Fix: When did you know you wanted to be a pro wrestler?

Nieken: I was six and I was watching TV and I found wrestling. I watched WCW for the first time in my life and I fell in love with it. From that point on, I knew that I wanted to be a professional wrestler. No matter what, I would take that leap of faith and look where I am now, still training as hard as I should be and loving every single minute of it.

Review Fix: In the documentary, it appeared you didn’t want to continue your studies. Now you’re enrolled in college. Why the change?

Nieken: I was so driven on wrestling that I didn’t feel the need to continue. I just wanted to wrestle. Throughout the documentary and talking with certain people, they changed my mind about getting a backup plan and go to school. I want to wrestle for the rest of my life, but in case I don’t make it anywhere higher than the indies, I needed a backup plan. So I continued my studies and moved on to college.

Review Fix: What did you learn most about yourself when filming?

Nieken: This is difficult to talk about, but honestly, it was how mean I was to my dad. I let all of my built-up rage towards him out in the documentary. I honestly didn’t mean that, it’s just how I felt at the time. I definitely don’t feel that way anymore about him and I am apologizing for it publicly.

Review Fix: How is the sport different from when you watched it to now?

Nieken: I look at it from a wrestlers point of view. Studying the psychology of matches I watch and try to absorb as much as I can from it. Also, I look for moves to do and try to perfect them. As a fan, I would just watch it and not really think about it, just be entertained.

Review Fix: Who are some of your favorite wrestlers? Why?

Nieken: One guy I always looked up to while I was growing up was “Macho Man” Randy Savage. His ring work was phenomenal and I loved the flashy look that he made popular. He also knew how to entertain people, which make up most of this little thing we call, pro wrestling. Raven was another guy that I wanted to emulate, because he is very wise when it comes to wrestling. His psychology in the ring is amazing as well. He’s very smart with ring work. Edge, Jericho and CM Punk are guys I look up to because I feel like I can work with a microphone and I can reach the level that they are at. It will take time, but you never know.

Review Fix: How difficult was the training emotionally and physically?

Nieken: It was very difficult to keep up with at the beginning. Just because I wanted to be as good as my fellow peers. I would beat myself up about things that I did wrong and I would get frustrated with my work. It’s gotten a lot easier throughout the time I’ve been wrestling, but it’s still a lot of hard work, constantly training physically and mentally as well.

Nieken: My finisher is Wade Barrett’s Wasteland, which I call the Shockwave. I thought it was a cool move, and I’m about Barrett’s size, so I knew I would be able to do it. I’ve always been a fan of moves that start in a fireman’s carry. And I’ll be using an arm submission (not sure what yet), but it will be called the Short Circuit.

Review Fix: What would you tell someone who is interested in becoming a professional wrestler?

Nieken: To join a good wrestling school, shop around if you have to. But make sure this is something you actually want to do. This is very hard work and you need to put a lot of time into it. And for the love of cod, cut the backyard crap, it’ll get you absolutely nowhere in this sport.

Review Fix: What do you think is the most important trait that you have that has helped you get this far?

Nieken: I think it’s mostly my acting background. I took up a lot of acting throughout high school to get myself comfortable being in front of a crowd. If I wasn’t a comically funny wrestler, I think I wouldn’t be where I am now. It also taught me a lot about facial expressions and emotions, so I knew it would help me out.