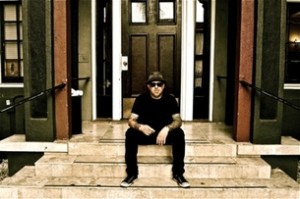 Singer-songwriter PEBS (a.k.a. Jon Pebsworth) will independently release his debut album Sweet Surrender September 20. The album is a breathtakingly honest ten-song collection that sees Pebsworth confronting his inner demons and transforming them into a series of California-inspired folk songs that are as cathartic as they are catchy. The songs on Sweet Surrender tell a familiar tale of loss and woe–but one that is supplemented with underlying hope and innovative instrumentation.

Pebsworth (whoâ€™s had the nickname PEBS since first grade) has been a fixture in the thriving California punk scene for two decades with his band Buck-O-Nine, but PEBSâ€™ debut recording is a collection of songs that explore a totally different side of the music spectrum. Sweet Surrender features everything from â€œNovember,â€ which has an alt-country twang with a chorus that anyone who has suffered heartbreak can indentify with, to â€œWe Drove All Night,â€ about the years that Pebsworth logged on the road.

â€œIâ€™ve been working on these songs for awhile, but honestly it was never anything I planned on releasing,â€ Pebsworth explains. â€œIâ€™ve always fiddled around on acoustic guitar, but once I started playing the demos of these songs for my friends they were the ones who really encouraged me to get out there and pursue this project.â€

Ultimately, while Pebsworth conceptualized PEBS–who recently made their full-band debut at the Hotel CafÃ© in Hollywood–more as an outlet for himself than as a commercial project, the reaction heâ€™s gotten to these songs has encouraged him to take the next step down a path heâ€™s been exploring ever since he first picked up a microphone twenty years ago. â€œThese songs have been collected over the past few years and they include all of the great points in life and the points that most people would want to forget,â€ he summarizes. â€œNothing in here is made up; everything is about me and now itâ€™s all out there for the world to hear.â€

Pebsworth admits that the title track is a very emotional song. â€œI recently turned 40 and started evaluating my life and questioning whether Iâ€™m where I want to be. Things havenâ€™t always turned out exactly as I expected, but in the end, I decided to try to focus on the positive, accept things as they are and keep going. Sometimes you have to give up on something youâ€™ve worked hard for and move on with your life.â€

He reveals that the poignant â€œWhat I Need Is A Friendâ€ is basically â€œabout being lonely.â€ â€œIâ€™m from LA and went to college in San Diego. When I came back, LA felt like a lonely town. There are lots of traps you can fall intoâ€¦drinking, drugs. This song is really about being able to find balance in all the craziness and trying to find a friend that can help you through it.â€

On â€œWe Drove All Night,â€ Pebsworth reflects on years of life on road with Buck-O-Nine, times that were â€œawesome, terrible, amazing and shitty.â€ He continues, â€œNow I look back on that time fondly; those were some of the best days of my life. The song is about remembering the incredible feeling that I had back then and also acknowledging that I took it for granted. I still love getting together to play Buck-O-Nine shows. Some guys golf with their friends, some have poker night, some have ski trips. My friends and I play shows together.â€

PEBS is currently playing shows in the Southern California area, with plans in the works for a national tour later this year.