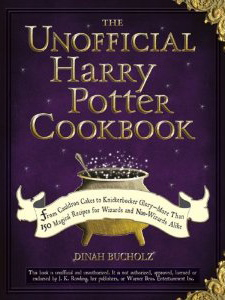 Fans may wonder what they should be doing now that the Harry Potter movie franchise has come to an epic end.

One thing they could do is head to the bookstore.

No, J.K. Rowling does not have a new book on the shelves- though some are still hoping for that prequel- but, there is the “Unofficial Harry Potter Cookbook,” by Dinah Bucholz, if your still hungry for a new Potter book.

Get your cauldrons out and flip through the dozens of witch and wizard- as well as traditional English dishes- Bucholz has compiled a ton of them in this great work which Muggles will thoroughly enjoy.

Each recipe comes with easy steps and even a bit of background as to where it may have originated. Muggles have their usual, like Fish and Chips, Shepard’s Pie and Bangers and Mash. But for those who have been chosen for Hogwarts, you can recreate Honeydukes treats, Hagrid’s rock cakes and even the birthday cake he gives to Harry in book one.

What makes this cookbook interesting is that each recipe starts off with an excerpt from where in the series it is found. Each chapter is divided into sections for specific culinary favorites such as Chapter Seven’s nod to Hogwarts’ Great Hall and evn Lunch and Dinner in the Dining Hall.

Although this book is a must have for fans, the obvious disappointment is the absence of the infamous Butterbeer recipe. Presently, the only way to obtain the official beverage is at Universal Studios Wizarding World of Harry Potter. However, recipes for the drink float around the internet and some distributors may sell their versions.

Other than this missing favorite, the rest of this cookbook is sure to leave Deatheaters and Members of the Order alike, quite satisified.