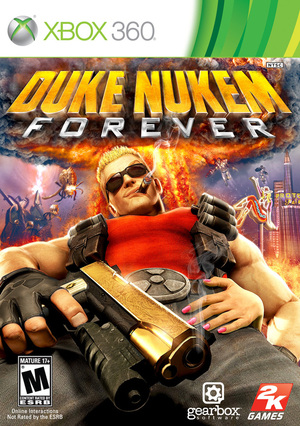 In 1999, 3D Realms Studios showed off a trailer for their then-new game, “Duke Nukem Forever.” It caused quite a stir in the gaming community. Many gamers wanted it. Since then, the game was cancelled many times, was worked on by many programmers across a myriad of studios, had many gameplay changes and a plethora of teaser trailers that made empty promises. Ultimately, Duke Nukem Forever became a joke across the gaming community; thousands dismissed it and never thought it would ever be released. However, to many gamers surprise, Duke Nukem Forever was finally released in June 2011 on the PC, PS3 and Xbox 360 after twelve years in development.

Sadly, what they got was a massive disappointment.

The gameâ€™s major flaws stem from its uninspired and boring gameplay. Gone is the ability to carry as many guns as possible. Unfortunately, you can now only carry two guns. The guns themselves, besides Dukeâ€™s iconic Ripper, feel generic and run out of ammo quickly. Add to the fact that enemies take way too much damage to kill and head shots arenâ€™t automatic kills and youâ€™ll find yourself having to rely on your fists for survival. Yes, fists. Don’t get so happy just yet though. Dukeâ€™s iconic kick has been reduced to being part of finishing moves Duke can perform to a stunned enemy.

If thereâ€™s one thing that should never be in a first person shooter is platforming sections. Platforming feels awkward, due to it being near-impossible to judge your jumps properly. DNF has these sections and they are as frustrating as they sound. Thereâ€™s one where you need to scale a statue of Duke, surrounded by buildings. Trying to climb up the statueâ€™s arm is a lot harder than it should be.

There are also two driving sections in this game that are also bad. One is in an RC car and another is in Dukeâ€™s monster truck. The controls will irritate anyone who has played a driving game. Shoulder buttons for the accelerator, brake and reverse feel awkward. The face buttons feel more natural. The monster truck level is way too long. You also need to stop every so often because the truck runs out of gas. You’ll need to defeat a large wave of enemies before you can even start looking for the gas tank.

The audio is also a disappointment. Besides the gameâ€™s theme, the music is forgettable. Jon St. John reprises his role as Duke and the one-liners are all over the place. Theyâ€™re great the first ten minutes of the game, but even that gets old fast. Hearing â€œhail to the kingâ€ every five minutes looses any impact the line once had.

Wait, it gets worse.

The load times are long and the game needs to load every level. Every time you die, you’re greeting with a long loading screen as well.

Through all of this, twelve years waiting for another Duke Nukem game has ended in disappointment. In short, Duke Nukem is nothing more than an outdated relic of the ’90s. The only reason to play DNF is to close a hole in your heart that has opened twelve years ago. This king is dead.