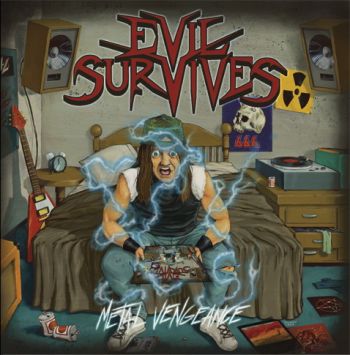 If you ever thought of giving your band a name like Evil Survives, you’d better be ready to bring it.

Luckily, this Canadian band not only live up to their name, they execute in a unique blend of metal with their sophomore alum â€œMetal Vengeance.”

The album contains a prominent Iron Maiden influence as well as a huge nod to Accept, Helloween, Mercyful Fate, Judas Priest, AC/DC and hometown thrash legends Voivod. Singer Karl Warkentin bears a similar style of Viovod singer Denis â€œSnakeâ€ Belanger and the legendary AC/DC frontman Bon Scott at times. You would think there were a few guest appearance during certain moments. Some from beyond the grave.

That goes on to say the band itself has borrowed more than a few pages from Iron Maiden’s book, as they bear a similar sound from the drums to the bass. â€œBeasts of the Odesseyâ€ definitely sounds like a lost Maiden track that never made it onto â€œPowerslave.” The harmonies displayed by guitarists Sean Oko and Adrian Riff are beautiful and mighty. This song is easily the best on the album and really showcases Evil Survives as a whole.

Another song that displays the talent of this band is the opener â€œEvil Will Surviveâ€. It’s a groundbreaking opener with plenty of balls that just shreds your face off. Once you get a taste of them, you’ll want more, which the rest of the album continues to do.

â€œMetalâ€ is another headbanger that contains great vocals again by Warkentin and impeccable bass playing by Sam Martz. This song shows what fine assets these two are to the band. Between Martz and drummer Derek Kroll, theres no better driving force of the band. An interesting jazz interlude takes place here.

Some tracks are a little goofy, like â€œVampire Ambush.” It’s okay, but a little boring. The riffs sound stock and the mid pace tempo is yawn-inducing. This might be the only track that really does this to anyone though, so all is not lost.

The final song. â€œJPLâ€ (Judas Priest Live), is a great closer with the obvious influence there. Warkentin sounds more like King Diamond than he does Rob Halford, but metal heads know that’s nothing to complain about. Great shredding takes place in this last number.

Evil Survives pulls off a colorful display of talents in their second release â€œMetal Vengeance.” It’s got the makings of a classic record that older fans of the genre will appreciate. They shine as a band and know what works. They deliver a strong horned salute to their idols, Evil Survives not only lives up to their name, but proves that in the world of metal, evil does survive.