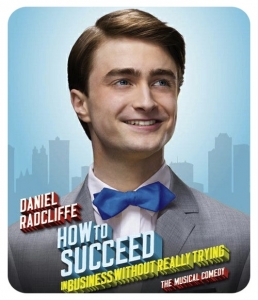 Darren Criss from â€œGleeâ€ will take over Daniel Radcliffeâ€™s role in â€œHow to Succeed in Business Without Really Tryingâ€ on Broadway when he quits in January, Playbill reported. Criss, however, only committed to a limited run, which ends after three weeks. One of the showâ€™s representatives said no one is certain whether itâ€™ll continue its run after heâ€™s gone.

Criss will star as J. Pierrepont Finch, the window washer who uses a how-to book to land a job as an executive.

â€œWhen we learned of Darrenâ€™s dream of performing on Broadway we knew we had found our Finch, but presumed his â€˜Gleeâ€™ schedule would eliminate any chance to work with him,â€ said â€œHow to Succeedâ€ director and choreographer Rob Ashford. â€œWe are ecstatic and grateful to Ryan Murphy and his â€˜Gleeâ€™ team at 20th Century Fox TV for helping to make both Darrenâ€™s and our dream come true.â€

No stranger to sharing roles with Radcliffe, Criss portrayed the eponymous character in productions of â€œA Very Potter Musicalâ€ and â€œA Very Potter Sequel,â€ which Criss co-wrote while attending the University of Michigan.

Last month, Fox promoted Criss from supporting actor to main-cast member on â€œGleeâ€ after his character emerged as a potential boyfriend for Chris Colferâ€™s character in November.

This article was originally published in AllMediaNy.com