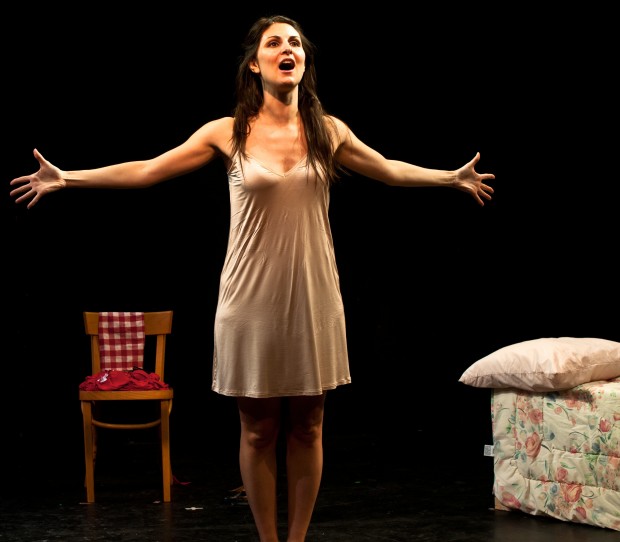 A part of the 15th Annual New York International Fringe Festival, “Vignettes of an I-talian American Girl” is pretty successful with minor shortcomings. With a few over-dramatic monologues and a bit too much telling, the play still has a lot of potential and a nice touch of humor; it is entertaining and lively. In addition, you get to know a lot about a traditional Italian family, their values and ways to preserve their culture in a foreign country.

In short, you will love it if you don’t mind a little bit of preaching and dramaticism.

Written and performed by Maria Baratta, the play is based on her own experience growing up as a daughter of Italian immigrants in a small town in Massachusetts. On the one hand, from her early childhood, she was taught to be a traditional Italian maiden, a respectful daughter and a good Catholic. One the other hand, she notices the difference between the Italian life her parents recall and the American reality that surrounds her. Trying to compromise between the two, Maria searches for her own identity and femininity and this is the most important theme of the performance.

Being the gem of the play, the cultural aspect of the “Vignettes…” is colorful and humorous, especially when it comes to describing her uncles and aunts. Baratta lovingly laughs at some things her family members say and do, and the audience understands that even though she respects her cultural heritage, she clearly sees that some of the old-fashioned Italian values don’t work in the United States. For instance, the role of a woman is not limited to being a wife and a mother anymore, and having a lover for an unmarried woman is not as dreadful as it used to be in a conservative Italian family years ago.

As a contrast to herself, the playwright introduces her younger sister Nicolina, rebellious and not conservative at all. Nicolina even dared to date guys outside of her race, which was unacceptable for her “traditionally prejudiced family,” as Baratta describes it. The only good thing was that her parents never found out and were spared the trouble. While Baratta was fighting her natural desires and curiosities in order to be an obedient daughter, her sister was going along with what she felt was right, and her strategy was to do whatever she wanted as long her family didn’t know.

Learning from her sister, Maria understands that concealing who she is doesn’t work well, and at the end of her journey she finds the best compromise she can. And her struggle is not limited to her parents’ conservatism; it is also inside her. It is the contradiction between who she was told she should be and who she feels she truly is. Thus, the play brings us to the next level. Even though we are dealing with an Italian family, this is what we all face when we discover that the values of our family are not quite compatible with our own identity, and therefore, the audience can easily relate to the character and feel for her.

Personal and touching as it is, the performance even makes the audience cry at the moment when Baratta tells the viewers about her family’s biggest tragedy.

The only problem is that she was telling more often than showing, which gave the public an impression that they are listening to a preacher rather than enjoying the play. Had the playwright chosen to keep bringing in more humor instead of giving the viewers inspirational messages and cliche-like phrases, the play would have been even more successful.

With Baratta’s incredible acting skills, showing would have been more effective and more appreciated by the audience members. She has an expressive face that tells us more than words can possibly reveal, and the way she represents the character engages the audience. But it seems like with her prolonged monologues, the stress is rather on words than on actions, which usually doesn’t work in drama. What saves the performance is, however, its never-ending humor that helps people to get by even during out hardest times.

With all the good moments and weaknesses of the play, “Vignettes…” is definitely an interesting Fringe piece that deserves our attention. Despite the emotional loud, it leaves a light impression. We don’t feel overwhelmed by Baratta’s personal tragedies. On the contrary, we can see that this could happen to us as well, which keeps us interested. Even though that there’s still some work left to do to make the play even more appealing and exciting for the audience, it is definitely a good material for a successful comedy with elements of drama and a great one-man show.