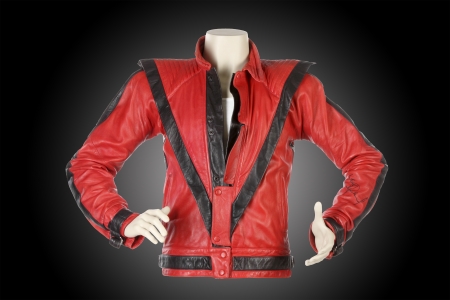 It wasnâ€™t enough for Michael Jackson to be the greatest dancer on MTV â€“ he wanted to wear outfits that caught your eye before he even made a move. That wasnâ€™t easy to do in his videos, which often had magnificent distractions: A sidewalk would glow in time with his choreography, or punks would dance with him in a subway station, or heâ€™d meet a supermodel in ancient Egypt.

He had an outfit to go with whatever concept happened to cross his mind, a few of which became part of his own image. The clothes he had on in â€œBeat Itâ€ and â€œSmooth Criminalâ€ â€“ he wore a red and silver jacket in one, a blue shirt beaming from a white outfit in the other â€“ represented the grandeur of what he did, like the suit of a superhero.

His jacket for â€œThrillerâ€ was like that, too. With its red dazzle and black edges that ran along its tornado frame, not only did it make him stand out in a crowd of dancing zombies, but itâ€™s the most notable thing anyone in the whole production had on. On another guy, a jacket this unconventional mightâ€™ve looked strange. On him, it looked almost as fantastic as the way he moved in it.

Itâ€™s hard to put a price on a jacket that iconic. For anybody who wants it when Julienâ€™s Auctions offers it on Sunday, though, the bidding starts at $200,000.

If $200,000 seems steep, remember that apart from the beat-up copy he wore with his zombie costume (which wound up in the Rock and Roll Hall of Fame), itâ€™s the only genuine â€œThrillerâ€ jacket out there. Yes, the sequined glove also had a big effect on his career, but he owned a number of them, which might explain the low starting price of $20,000 for one at the auction.

Of course, some gloves have more meaning than others. â€œThe highest price paid for a Michael Jackson item in our previous auctions is $420,000,â€ Julien said, â€œfor (the) white glove that he wore at the â€˜Motown 25â€™ special.â€ Considering this was the first time the world saw Jackson perform the moonwalk, maybe the price was right.

Then again, wearing one glove was his trademark â€“ the jacket had been a one-shot deal. When the video took off, however, the jacket came along for the ride. â€œThe jacket was featured in a video that really helped usher in the MTV era,â€ said Vice President David Reeder of GreenLight, an agency that represents celebrity estates. â€œEach release of a single and accompanying video was a must-see for music lovers around the world.â€

Thatâ€™s enough to pull in a good amount of money right there, but ever since Jackson died in 2009, everything he touched has turned to gold. â€œWithout a doubt, Jacksonâ€™s passing has positively affected the value of his memorabilia,â€ Reeder said. â€œCollecting a piece of him through the purchase of exclusive memorabilia like this jacket allows people to capture a piece of their own history.â€

Itâ€™s also a big part of designer Deborah Nadoolman Landisâ€™ history, given that the â€œThrillerâ€ jacket might be the most famous piece of clothing she ever made. (There are others, including her outfit for Indiana Jones.) Whatâ€™s weird is that Jacksonâ€™s popularity didnâ€™t even matter to the design. â€œI wasnâ€™t dressing a rock star,â€ she said. â€œI was dressing an actor that was singing and dancing.â€

No matter how she thought of him, she made sure that anyone who saw â€œThrillerâ€ knew exactly where to lookâ€¦not that he wouldnâ€™t have gotten people to notice anyway.

â€œMichael never needed fancy dress,â€ Landis said. â€œHe would be the center of attention in a T-shirt and jeans.â€

This article was originally published in AllMediaNy.com