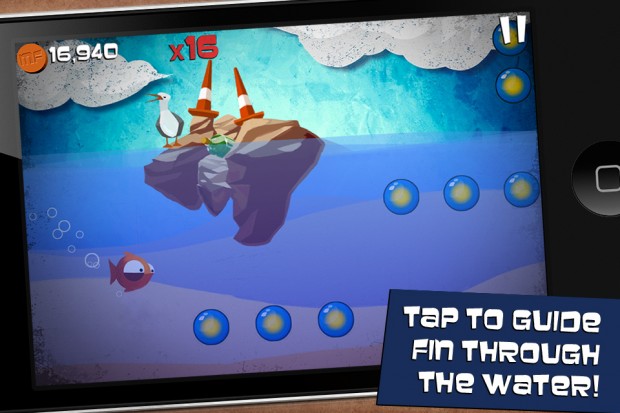 In the â€˜80s, games such as â€œPac-Man,â€ â€œFroggerâ€ and â€œGauntletâ€ were able to attract huge audiences and entrench themselves in video game history thanks to simple, yet addictive gameplay.

While â€œMighty Finâ€ isnâ€™t in the same league as those aforementioned titles, as itâ€™s less a trendsetter and more of a product making the most out of what works for a touch screen game, itâ€™s ultimately a treat rarely found on a growing market of mobile games that fail to deliver the goods.

With colorful graphics, easy, fun controls and at times, challenging difficulty, â€œMighty Finâ€ has enough polish to satisfy both hardcore gamers and casual ones on the iPad and iPod Touch.

Overall, itâ€™s the kind of game that will make you tell your friends, â€œCome over here, you have to try this.â€ A perfect example of gaming precision through simplicity, â€œMighty Finâ€ is able to hide its weaknesses in a way that many classic retro games do. As a result, itâ€™s a must-own title on the iPad and a perfect escape while on the train, bus or anywhere youâ€™d rather not be.

Using your finger, you are able to control your characterâ€™s depth in the water to reach coins and avoid obstacles. By holding your finger on the screen, the fish will remain underwater, while releasing it will have him jump. If this sounds overtly simple, itâ€™s because, well, it is. However, after a few rounds of gameplay, youâ€™ll learn how to control your fish in a way where you can get hard to reach coins in the air and on the ocean floor and eventually get that crazy high score you want.

But make no mistake, thereâ€™s a bit more to â€œMighty Finâ€ than high scores. With a nice amount of unlockables, which are new costumes for your character, itâ€™s a fun swim through each randomly generated level to find each new attire. While many of the early levels are easy, the later ones are much more difficult and can even be particularly long. With these changes in gameplay, â€œMight Finâ€ avoids being too repetitive and is able to satisfy.

The only true drawback of the title is the music, which is rather bland. The same thing goes for the sound effects, which, in the end, donâ€™t add anything new to the bright graphics, which even at 2X magnification on the iPad, are still adorable. Had the sound been up to par, â€œMighty Finâ€ might be considered one of the most well-rounded touch screen games currently available on iTunes.

But even in spite of this fault, â€œMighty Finâ€ is still a wet and wild romp that indeed lives up to its name.