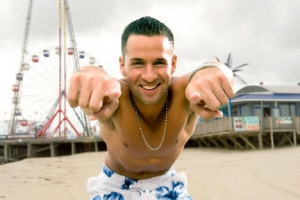 Thereâ€™s a â€˜situationâ€™ at Abercrombie & Fitch, and theyâ€™re not too happy about it.

In an interesting change of heart, A&F has decided that it doesnâ€™t like its brand to be worn by the cast of MTVâ€™s Jersey Shore, despite the fact that they once sold shirts donning the title â€œThe Fitchuation.â€ The company said in a news release Tuesday that they are â€œdeeply concernedâ€ that Mike â€œThe Situationâ€ Sorrentino â€œcould cause significant damageâ€ to their â€œaspirational natureâ€â€”and theyâ€™re offering to pay to have their brand removed from the show.

Money and back-to-school sales aside, this is a pretty odd turn of events for a retail chain widely known for their appeal to a preppy, sometimes pretentious crowd. Perhaps they donâ€™t need the extra boost from MTV, since itâ€™s unlikely that trashy reality television could do much damage to a popular brand, but their decision just might signify something bigger that weâ€™ve all been thinking for quite some time.

America may be obsessed with the personal lives of outlandish characters like the Jersey Shore crew or the Real Housewives, but the brainless drama that occurs can definitely get old quick. Perhaps what Abercrombie is telling us is that they are tired of the crap, just as many TV viewers are slowly beginning to realize.

What happened to well-written TV shows? When Buffy the Vampire Slayer was cancelled, the end of Angel was soon imminent. What did they fill the time slot with? Reality shows, obviously. Sure, sitcoms and dramas are still in production, but reality TV has accosted basic cable for way too long. Perhaps what A&F is saying, at least subconsciously, is that we donâ€™t need it anymore.

Okay, sure, speaking out against something that your prime customer base loves is probably mostly a publicity stunt. Guidos wear Abercrombie all the time, right? Or was that Ed Hardy? At any rate, whether or not they just want the attention, they bring to our attention the fact that reality TV is useless in the process. America has given in to the guilty pleasure of watching other peopleâ€™s lives for too long, sometimes with tragic results for the stars.

Paying off a show to not use your product may seem harsh, but itâ€™s a good start. Product placement in Hollywood runs rampant, so why not try product un-placement? Letâ€™s show these reality stars that we mean business by not doing business with them! Maybe America can claim back some of their brain cells by realizing how brainless these shows can be.

While there is obviously no immediate end to reality television, Abercrombie & Fitch has shown us that there are ways to take a stand and prove that we can have independent thoughts, even if these independent thoughts technically are probably just a way for the company to get their name in the news. Â Still, publicity stunt or not, maybe these reality shows do give productsâ€”and Americaâ€”a bad name. Maybe itâ€™s time to go back to well-written, scripted television with an actual plotline. I hear Sarah Michelle Gellar has a new show coming out…