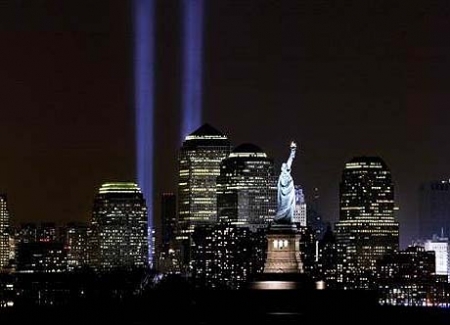 Itâ€™s hard to know when the Internet became indispensable, but seeing as it was something of a novelty when 9/11 happened, TV was probably Americaâ€™s most reliable social barometer. Whatâ€™s more is it gave entire age groups something to watch â€“ there wasnâ€™t a trace of the attack on the kidsâ€™ shows on Nickelodeon, and the plots in those old movies on AMC existed in a closed system of silver-screen capers and Technicolor musicals.

Teenage viewers, of course, preferred the bite-size musicals of MTV, and while they werenâ€™t as long as any of those old epics, most of them had the same knack for divorcing themselves from reality. Then again, given how many times itâ€™s renewed â€œThe Real World,â€ it makes sense that a handful of the videos on MTV would reflect on, well, the real world. Although 9/11 didnâ€™t stop MTV from promoting Britney, Justin and Christina, hereâ€™s a list of the top five videos that made viewers face the music.

5. Artists Against AIDS Worldwide – â€œWhatâ€™s Going Onâ€ Although it began as a group recording of the Marvin Gaye standard that producers Bono and Jermaine Dupri organized to raise money for AIDS relief, the most inspiring images in the rush-job video for â€œWhatâ€™s Going Onâ€ were of people pulling together in the wake of the worst act of terrorism the nation ever faced. The struggle against human suffering has probably had more qualified figures to represent it than Nick Carter and Fred Durst, but you know what they say about having greatness thrust upon you.

4. Coldplay – â€œYellowâ€: The video for Coldplayâ€™s â€œYellowâ€ already made a splash on MTV by the time the towers fell, but considering it was the first thing its viewership saw when CBS News finished a marathon of coverage itâ€™d provided on a variety of cable networks, maybe it deserves a place here. Besides, the sunrise greeting front man Chris Martin while he skirts a shoreline offered a spark of encouragement that reminded everyone that, no matter how dark it gets, the morningâ€™s closer than it seems.

3. N.E.R.D. â€œProviderâ€:Thereâ€™s a narrative thread in N.E.R.Dâ€™s drug-dealer anthem â€œProviderâ€ that makes for a big surprise when the hero Brad Renfro plays winds up in the military, undoubtedly to fight in the war on terror. It also showed everyone a different side of front man Pharrell, who proved he was capable of singing about more than the good life.

2. Live â€œOvercomeâ€: With all the images of ground zero that dominated the airwaves after 9/11, Liveâ€™s â€œOvercomeâ€ video was merely another drop in the bucket. What makes it so breathtaking, though, is how it contrasts with the memories we had to carry afterward â€“ seeing how dismal the wreckage looked when the sun went down gives this the intimacy of a nightmare.

1. Ryan Adams – â€œNew York, New Yorkâ€: Many of New Yorkâ€™s most famous buildings get screen time in Ryan Adamsâ€™ â€œNew York, New Yorkâ€ video, but the two on everybodyâ€™s mind after 9/11 were still part of the skyline he performed in front of less than a week before they collapsed. Most of the subsequent footage we have of the World Trade Center shows it in its final minutes â€“ knowing that while listening to Adams giving it the last rites in the form of an acoustic ditty makes the whole thing that much more effective.

This article originally appeared on AllMediaNY.com