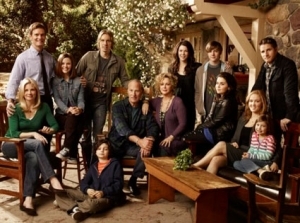 This was one of the best episodes to date. Drew gets a love interest, Sarah is still attached to Amber but is redeemed with a hilarious rat scene, Adam shows a softer side, and Kristina… well, there was a nice moment and then she had to ruin it by talking and of course, crying.

It is bizarre how Drew will disappear for episodes at a time and then, suddenly reappear like heâ€™s been there all along. Silly writers.Â  Anyway, this episode he was the star and a new love interest has entered his life. You’ll love how awkward yet intelligent Drew is. It’s fair to say that if you were a 17-year-old girl, you’d have a crush on him. One of the funniest scenes was when he visited Amy and by accident let her dog out; seeing Amy run after him and Drew not even budge, but stand there with a horrified expression was classic.

Sarahâ€™s attachment to Amber is just too much. Sarah takes back the clothes Amber donates to the garage sale, brings her a catalogue at work, and is offended when Amber wonâ€™t change her shift for the baby shower. I get that â€˜I might not understand â€˜cause Iâ€™m not parent,â€™ but Sarah, at least pretend and act sane or your daughter will never come back. Although, it was awesome when she and Amber saw the rat and went ballistic.

Adam usually appears as the serious older brother who believes he needs to act as the role model for the entire family. He tends to lean more conservative and protective like Julia, opposed to the free nature of Sarah and Crosby; however, while remaining in-line with his character, Adam approaches the parents who planned to sue Alex and opens up more than usual. His pleas are well-thought out but backed with emotion he is inclined not to show. He admits his previous faults, and in turn, I respect him even more. Ultimately, he was successful and the parents dropped the charges. Yey!

Crying Kristina is Back and Annoying as Ever

There was a great scene where pregnant Kristina walks around the house during the baby shower, and in each room, different family members are gathered and having a good time. By her expression, the slow camera effects, and the music, a nostalgic and grateful feeling is portrayed.Â  They should have left it at that, but alas, Kristina decides to sit down with Crosby and tells him he better not â€œscrew upâ€ because you know, thatâ€™s what Crosby does. And she cries a lot.