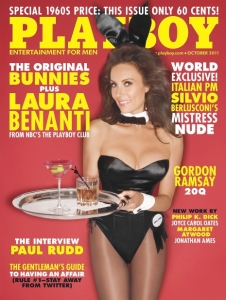 While going retro, Playboy is staying modern by showcasing the hot trend of 1960s styles. Hugh Hefner, Playboy founder, has gone back to the magazineâ€™s roots and is selling the newest issue for only 60 cents. The magazine makes majority of its revenue through subscriptions, and Hefner said he could make up some loss through increased advertising.

In addition, the issue will feature popular styles of 1961, when the first Playboy Club originated, coinciding with the premiere of the new television show, The Playboy Club, placing its star Laura Benanti on the cover and center spread.

The Playboy Club debuts on September 19 on NBC. The show is a fictional drama focusing on life working in one of these 60â€™s nightclubs. The October issue is inspired by that lifestyle with inside pages featuring original Playboy â€œBunnies,â€ women who were employed by the clubs.

Benanti, 32, an actress and singer who won Broadway’s Tony for the Gypsy revival, sports one of the traditional Bunny costumes for the cover while showcasing her nearly-nude body for the photos inside.

What else ignited my interest? The issue includes an interview with funnyman and actor Paul Rudd, as well as offers â€œThe Gentlemanâ€™s Guide to Having an Affair.â€ For 60 cents itâ€™s more than worth it to pick up a copy on newsstands this Friday, September 16, and hey, you could always say youâ€™re researching the modelsâ€™ fashions (or lack thereof).