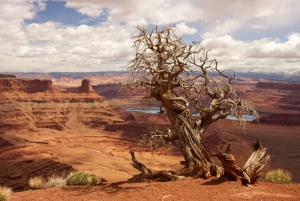 A 64-year-old hiker who broke his leg on September 7 crawled five miles across Utahâ€™s Blue John Canyon, the same desert where Aron Ralston had to cut off an arm that a boulder landed on during an ordeal James Franco depicted in the movie 127 Hours.

Although Wayne Richards told KTVX-TV Monday that he prepared himself for the hike by bringing snack bars and a GPS, crawling all that way over four days was tough â€“ especially on his knees, which he protected with a camera bag. By the time a Utah Highway Patrol pilot discovered him, he was two miles from his car.

â€œI just was thinking, â€˜This may be it, I may not be found,â€™â€ recalled Richards, who said he got the idea to visit Blue John Canyon after watching 127 Hours. â€œThen I was thinking, â€˜I got to get out of here.â€™â€

Apart from breaking his leg when he fell 10 feet into a canyon, he also dislocated his shoulder, which he quickly set into place. â€œIt was pretty dark and I couldnâ€™t get a good footing,â€ he said. â€œAfter about a minute, my hands gave out and I fell.â€

For as big of an admirer as Richards was of 127 Hours, it apparently hadnâ€™t taught him to avoid one of Ralstonâ€™s biggest mistakesâ€”he never told his friends or family where he planned to go.