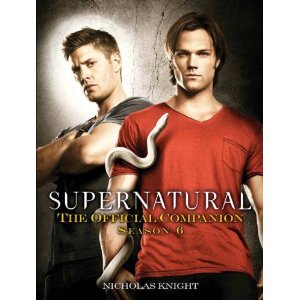 Very rarely does a plan for a television series to end a storyline arch over a period of five years work, but that is what Eric Kripke, the creator of Supernatural did. Itâ€™s the last episode of season 5 and Dean and Sam have just thwarted the apocalypse. Dean gets his â€œhappily ever after,â€ meanwhile Sam is Lucifer and Michaelâ€™s chew toy inside a cage in hell. Thatâ€™s the ending Kripke envisioned, still, Supernatural continues on.

Somehow the sixth season of Supernatural became more intense as the Winchesters had to contend with the fact that in the greater scheme of things, ending the apocalypse was no big deal. So, what do the writers do with a lonely ex-hunter who drinks to forget â€“ they bring back his soulless brother, an upstart demon and give the characters from the previous seasons a greater role in the Supernatural mythos.

That said Supernatural: The Official Companion to season six gives insight into the series and how the producers who took over the everyday workings of the show for Kripke, breathed new life into it. Each episode of the season has a synopsis with insider details as to how the episode came together. There are tidbits for fans of not only the show, but people who are interested in urban legends of different cultures. When you put a stop to the Christian equivalent to the end of the world, you get a chance to delve into the myths of others.

However, this compendium to the series lacks substance. Yes, the reader gets an inside look into the inner-workings of the series, but the anecdotes and one-liner quotes from every episode come across as superficial. Some would say that a search of the series would give you the same information. Why would you spend $15.00 on something you can find on-line for free?

If youâ€™re just getting on-board with the seventh season of Supernatural and you feel completely lost, then perhaps this companion book to season six will be helpful. Or, you can see the reruns on your local cable channel. Either way this reference book is not a must have, especially not when you compare it to Katherine Ramslandâ€™s and Anne Riceâ€™s â€œThe Vampireâ€™s Companion: The Official Guide to Anne Riceâ€™s The Vampire Chronicles.â€ Although one is a television show and â€œThe Vampireâ€™s Companionâ€ is based on a series of novels, both have a rich history to delve into, with the benefit of having the creator and writer of the characters available for deep insight into the intentions and motivations of worlds that revolve around a personâ€™s greatest fears coming to â€œlife.â€