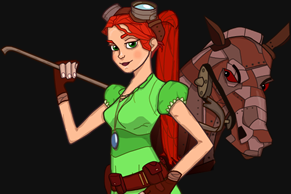 Ever since the inception of the iPhone and later, the iPad, video game companies have found a way to create story book/find the clue-styled titles for the platforms. To many gamers’ chagrin, these games, which were passÃ© nearly 15 years ago, have flooded the market even more so lately, creating a plethora of boring, mitigating crap.

Launching Pad’s “Scarlett and the Spark of Life” may fall into the same genre category as many of these hap-dash titles, but it separates itself by its pure level of enjoyment. Powered by colorful graphics and a fun and comedic story, the adventure will rarely let up. While it’s ultimately a linear and relatively easy journey, it’s a tale that can be enjoyed by anyone with an iPhone or iPad.

Although it takes roughly two to three hours to complete, there’s enough here to warrant a sequel. The control is simple; tap where you want Scarlett to go and she’ll go there. Tap whom you want her to speak to, or what you want to look inside and she’ll do that too.

Like the control, the story is straightforward as well. On the run from a duo of kidnappers, Princess Scarlett isn’t your average member of royalty. Tough and self-reliant, she carries a crowbar and isn’t scared to use it.

Is she a Lara Croft type of hero? No, but her quick wit and detective skills are enough to give Sherlock Holmes and MacGuyver a run for their money. With clues scattered all over the land and a hearty helping of people to speak to, Scarlett is a character you grow fond of very quickly. The cartoonish look suits the work perfectly as well. While the animation is a little rough around the edges, its look is charming and inviting enough to give it a pass.

The game’s only real fault is that it all ends too soon. When it’s all over, it’s fair to say you’ll be angry, but in the best way possible- you’ve only got a small sampling of the possibilities of this cool new character.