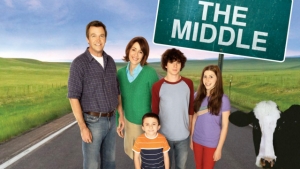 In this amusing episode of The Middle, the new school year has officially started, and while Sue is overzealous about entering high school, Axel is not. Brick still doesnâ€™t like gym, and this time, Mike deals with his teachers rather than Frankie.

Poor Sue. The episode begins with her telling her family everything about being a â€œfroshâ€ at the dinner table. Axel continues to roll his eyes and poke fun at her, then tricks her into taking swimming as an elective, knowing her next class was across campus, and she would always be late. We see her hilarious, failed attempts to get their on time; in one, she fills her backpack with all her books so she would not have to stop at her locker, and she ends up falling and canâ€™t get up. While Axel sees this, he runs away from her. Itâ€™s later revealed people took pictures of her as â€œturtle girlâ€ and sent them around, so he did not want to be associated withâ€”her but Frankie insists next time he should â€œflip his familyâ€ if that happens.

As much as Sueâ€™s eternal optimism could be adored, Axelâ€™s inherent laziness and need to pick on her is even more lovable. Sure, he constantly makes fun of her and avoids her in school, but at the end, we see him look out for Sue by yelling at people who were blocking her locker. Of course he did not do this in front of her, but that is what makes him so endearing. Sue knows he looks out for her, which is why she has an endless plight to be his friend. Sorry Sue, elder siblings equaling friends doesnâ€™t always happen.

Brick does not like his new teacher because he prefers females since he likes their â€œbosoms.â€ In addition, this male teacher throws a ball, and the student has to catch it in order to answer the question. Clearly, this is a problem for bookworm Brick, who convinces Mike to talk to the teacher by arguing he is always being thought of and mentioned last such as in cards, Brick is always signed as â€œand Brick.â€ He even says he is forgotten in the morning and has â€œbeen eating old candy canes everyday for breakfast.â€

Poor Mike has never talked with a teacher about Brick, since usually Frankie does it. The teacher makes him throw the ball back and forth to converse and goes on about how much he knows kids. He tells Mike that Brick will eventually want to participate in gym class, and Mike (along with the audience) knows that will never happen. Tempers begin to flare and Mike calls the teacher a child and then throws the ball wildly against the wall. It was great to see Mike get worked upâ€”considering he never doesâ€”and his awkward reaction afterward.

This episode was much better than last weekâ€™s premiere. Enough so to make anyone especially look forward to more of Sueâ€™s adventures as a freshman, as well as what other startling words Brick will say next.

The Middle airs Wednesdays at 8 p.m. on ABC.

This article originally appeared on AllMediaNy.com