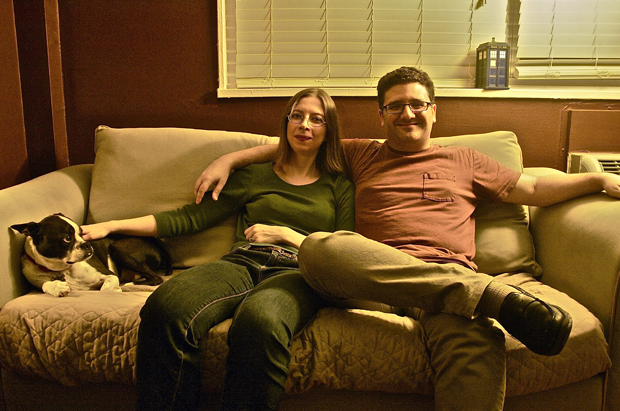 He prefers to keep them on his doorstep.

The founder of Wadjet Eye Games, Gilbert and his wife Janet, earn a living making games based on their neighborhood.

The companyâ€™s first game, â€œThe Shivah,â€ designed by David in 2005, mostly in coffee houses all over the East Village and Tribeca, follows a grieving Rabbi around the lower East Side in an effort to save his struggling Synagogue. Along the way, he gets involved in a sinister plot and must travel all over the city to find the truth. Wadjet Eyesâ€™ magnum opus, â€œThe Blackwell Saga,â€ continues the trend, as it follows a psychic detective and her spirit guide all over the East Village solving mysteries.

â€œThe character lives on Jane Street,â€ David, 35, said. â€œIn the first game, you go to Washington Square Park, the Brittany House Dorm, the Highline and Alphabet City. A lot of it takes place in this area.â€

David spent a bulk of his childhood playing games, but not the ones that feature fuzzy hedgehogs or overweight Italian plumbers with Rollie Fingers mustaches. He played point and click adventures that rely on a heavy narrative and interesting characters, rather than jumping on enemies and collecting coins or rings.

After a year teaching English in Korea, he moved in with his retired parents. Without an apartment or job, he spent his time in coffee housesÂ on his laptop and started designing games for fun.

â€œThereâ€™s nothing worse than having to move back home with your parents,â€ David said. â€œItâ€™s even worse when theyâ€™re retired.â€

After a month, he decided to make a career of creating the video games he played as a kid.

An admitted workaholic, David didnâ€™t have much time for love at this point in his life, especially after â€œThe Shivah,â€ got several good reviews and his later creation, â€œThe Blackwell Sagaâ€ did just as well. But at the Game Developers Conference in San Francisco in 2007, love found him. Without a place to sit for a panel, Janet, an England-native, sat next to him. They kept in touch and eventually met up again before marrying in 2009.

Janetâ€™s arrival in his life ended up doing more than completing him emotionally.

â€œI never envisioned making these types of games, with a wife or a partner and having a life together,â€ David said. â€œJanet was totally down for this. Before her, no one ever â€˜gotâ€™ this. It was awesome.â€

With her experience as a programmer for several different video game companies and technical knowhow, sheâ€™s the perfect accent to Davidâ€™s creativity.

â€œI was so interested in what he was doing. It was what I wanted to do too,â€ Janet, 34 said. â€œIt started out with me wanting to make games. It wasnâ€™t about eternal love. After a convention, you keep in touch with people via email, but it always stops after a while. We never did. We continued to speak on MSN, Skype and then real life.â€

In addition to coding all of the companyâ€™s games, Janet also finds the technical bugs in Davidâ€™s creations before theyâ€™re shipped out to customers.

Everything, even the voice acting for their games, takes place in the apartment. With a comfy couch, two computers and a 42-inch flat screen TV, itâ€™s functional; but with loads of comic books and video games neatly organized around the house, posters of the games theyâ€™ve created hanging in glass frames and a mini â€œDoctor Whoâ€ TARDIS on a window shelf, itâ€™s home to them.

If there was any confusion that this was a home as well as a video game studio, Gilbertsâ€™ 10-year-old Boston terrier, Cooper, who is listed on the companyâ€™s website as their CDO [Chief Dog Officer] puts those thoughts to rest. Cooper has also made in appearance in one of their games.

â€œBefore I was married, I could have stayed in my apartment and never left for a week,â€ David said. â€œI love going out for lunch with her and spending time with her.â€

Davidâ€™s added responsibility as a husband has also benefitted the company, as the Gilbertsâ€™ have also begun to branch out and publish other peopleâ€™s games. Earlier this year, they published a futuristic noir title, â€œGemini Rue,â€ which was produced by UCLA undergraduate Joshua Nuernberger.

Their goal is to build their company and make it a destination for young designers. They also have plans to start a family in the near future.

â€œEvery day is different,â€ he said. â€œNothing is ever the same. Weâ€™re doing so well now that we wonder how things would be if we werenâ€™t in the middle of a recession.â€