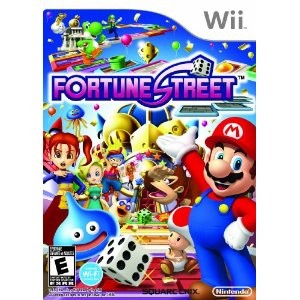 Somebody at Nintendo has to be real gutsy to make their own video game version of Monopoly. But it’s ultimately a stroke genius. A Monopoly video game with Nintendo and Dragon Quest characters on the Wii? Say hello to â€œFortune Street.â€ But is it worth playing at all?

â€˜Fortune Streetâ€ is a long established series in Japan called â€œItadaki Streetâ€ with each game having different characters and appearing on different consoles. This one, the first to be available in America, features Nintendo and Dragon Quest characters.

This may seem like another variant of Mario Party to the uniformed, but itâ€™s actually Monopoly with a few extras. Like Monopoly, you can buy and sell properties, but here you can improve each propertyâ€™s value, buy/sell stocks, draw chance cards that do random things to the board (10% value on all properties for example) and play mini games. There are two different rules here: easy and standard. The easy rules make the game feel watered down and too simplistic, so itâ€™s better to stick to the standard rules.

As for playing the game, the one player mode is only worth playing to unlock the four unlockable characters, new stages and accessories you can use to customize your Mii. Even though each character has their own unique quotes whenever they move, they still feel artificial and make you feel like you are playing alone. Not to mention that they are much more forgiving than any human will ever be. Monopoly is meant to be played with multiple people and even here, itâ€™s a blast to play with three human players and is preferable.

Graphically the game isnâ€™t anything to write home about. The characters look how they should- if you can recognize them. The problem with using Dragon Quest characters is that very few Americans know what Dragon Quest is, little less who these characters are. Fans will have a ball seeing some of their favorite characters rolling a die and playing a friendly game of Monopoly. Each board looks the same except the number of squares are different than the last and the designs are different. The boards float above the main arenas and the arenas themselves look boring. Good thing you wonâ€™t notice them while playing.

The music in this game are remixes of songs from the levels that each board represents. Theyâ€™re not all that exciting to listen to and sound far too generic and low definition to make any kind of impact. Unlike the Mario Party games, the characters have no sound bites, so all youâ€™ll hear are the sounds of the dice rolling, the drab music and your fellow playerâ€™s commentary.

Ultimately, â€œFortune Streetâ€ is Monopoly with a few extra rules and Nintendo and Dragon Quest Characters. Despite the mediocre sound and graphics itâ€™s still a fun game with three human players and even better if you know who each character is. Only play the one player mode to unlock new stuff.