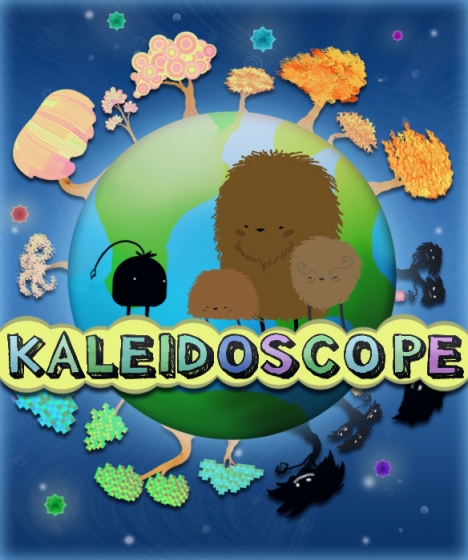 Iâ€™m a game slut. I am not embarrassed to admit it, most games donâ€™t hold my attention for very long. I can lose hours (okay, days) playing, but then I have to switch to something else to satisfy my needs. Nevertheless, once in a while, Iâ€™ll come across something that I not only want to finish, but need to finish. This is true of Kaleidoscope, an enormously fun indie title from Morsel that was released in February 2010.

At first glance, I might have overlooked this gem, as it is overly cute and reminds me of a Mr.Men/threadless love affair that takes place on Kashyyyk, but after ten minutes of gameplay, I was hooked.

At only 240 MSPs ($3 USD), itâ€™s not going to set you back much and itâ€™s cheaper than a Zune Marketplace movie rental.
The backstory is that the once lush world of Kaleidoscope fell victim to a â€œhorrible outbreakâ€ that â€œdrained all of its color.” All the common folk flee except for Tint, the adorable little walking Hefty bag that you control, who opts to stay with his grandparents.

As you jump around the world, you collect pigments (Blue, Yellow and Red) which are not only primary colors, but conveniently match up to the remaining action buttons on your controller. Blue is a speed boost, yellow is a Princess Peach-esque hovering function and red is a temporary shield. If you use your â€œpowers,” you drain your reserves.

This may seem a little cheesy to hardcore gamers, but screw them. This is a fantastic game. My favorite book (and animated movie) as a kid was The Phantom Tollbooth and I have relished the part when Milo takes the conductorâ€™s baton and brings color to the world for the day. The color and music connection goes one step furtherâ€” as you amass certain amounts of pigments, another layer of music is â€œunlockedâ€ as a new layer of color is added to the background.

To complete a level, you must seek out the lost colors until the last two levels, during which you have to close black holes. There are multiple ways to solve each of the earlier levels, providing extended gameplay for this unfortunately short adventure. One really canâ€™t complain for the measly price tag, though. I finished the game entirely over the course of three evenings, it could have been finished in one, and that is the only complaint. Needing more levels is probably the best flaw a game can have.

While extreme violence is a selling point that panders to most audiences, myself included, this well-organized and designed game doesnâ€™t need so much as a weapon to be entrancing. While you do have to lightly touch Murmurs to colorize them, itâ€™s more of a love-tap than it is a painful squashing.

All in all, Iâ€™d love to see more from Morsel.