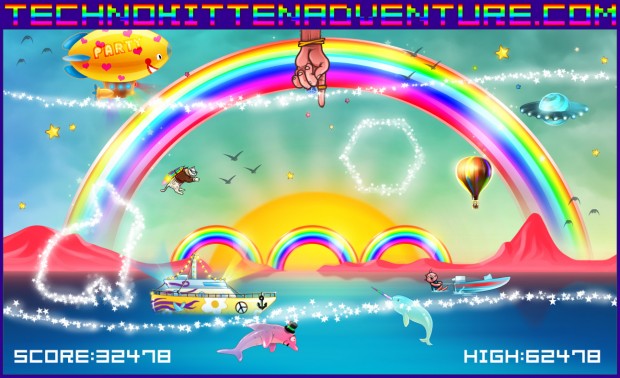 Imagine being whisked away to the world of open seas, the sun on the horizon, speeding boats, unicorns and the occasional â€œWaiting for Tonightâ€ video style laser explosions of merriment and ecstasy, right in your own living room- for only a scant dollar.

That reality is possible today, my friends.

Indie developer xMONOx’s â€œTechno Kitten Adventure” will surely satisfy meme-whores everywhere. The description alone sold me. â€œNavigate a kitten by jetpack, fueled by hopes and dreams, through a fantastical world of techno music.â€ How could IÂ notÂ purchase this blindly?

The moment the game loads, unidentifiable wedges of rainbow lights flutter across the screenâ€¦ UFOs and speeding boats appear and speed by. Small groups of birds, flocks of shooting stars explode into your field of vision. What is this, madness?

A lone kitten, waged with the task of operating a jetpack (if George Michael Bluth had a hard time, imagine this wee feline), struggles to maneuver around ill-placed polygon after polygon, that for whatever reason appears in his path alongside the land of the rising sun.

Just as your high score is racking up to an impressive six figures, you dip too fast and hit the border, erupting into a blossom of stars. Defeat.

Admittedly after a few rounds, the novelty starts to wear off and you wonder if thereâ€™s anything left to the gameâ€¦ or if itâ€™s another vicious cock-tease of infinite proportions likeÂ The Impossible Game.

An innovator in kitschy success, TKA is a must have simply because sometimes, thereâ€™s just nothing better to do and itâ€™s simply funny to play. The sheer stupidity of what youâ€™re doing is entertaining in itself.

The one song on repeat, “Sea of Love” by DJ Hixxy. It seems painfully similar to the tactics behindÂ Robot Unicorn AttackÂ (which features Erasureâ€™s “Always”), but the repetition is exactly what provides the foundation for this novelty game. I donâ€™t know when intentionally-corny came became a signifier of awesomeness, but letâ€™s hope it doesnâ€™t bring back a resurgence all the crap that reminds me of myÂ childhood.

Itâ€™s not something I would play all day, every day and itâ€™s certainly not something I play often, but knowing I have it in my library for when Iâ€™m up at 4am and donâ€™t feel like playing something challenging or involved is comforting. “Techno Kitten Adventure” is like a carton of Ben & Jerryâ€™s for my brain.