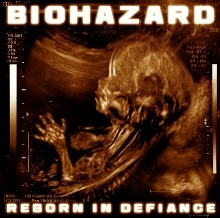 Biohazard was one of the first bands to incorporate metal and hardcore punk with elements of hip-hop into their music. Formed in 1987, the band went through several line-ups before settling back with the original members Evan Seinfeld (vocals/bass), Billy Graziadei (vocals/guitar), Bobby Hambel (guitar) and Danny Schuler (drums).

They are finally releasing a new album, Reborn in Defiance, on January 20; however, Seinfeld did leave the band shortly after its completion to focus on his pornography career.

Hailing from Brooklyn, the majority of Biohazard’s music describes the urban plight through aggravation and rage. Two decades later, it appears the bandâ€™s anger is still fuming, and while the album is consistent and entertaining, it appears drab compared to similar bands following their lead.

â€œVengeance is Mineâ€ showcases fast drums and hard beats. Opening with, â€œYou think you know me, f-ck you,â€ the song is clearly pointing at fans or people who may judge their comeback. They then repeat, â€œVengeance is mine!â€ The band means business.

During â€œDecay,â€ the electric guitar shreds impeccably and is reminiscent of 80s metal, overlapped with 90s screamo. The bandâ€™s punk influences come through most on â€œReborn,â€ and â€œVows of Receptionâ€ features their rap skills with a drawn out, harmonized chorus. It is apparent this band is the original Linkin Park.

â€œKilling Meâ€ may be the catchiest song on the album, and its lyrics, about having to â€œbreak myself away from you and your disease is killing me,â€ are sure to get stuck in your head.

Through all this fury, the group slows down on â€œYou Were Wrong,â€ portraying a more displaced sadness than the other songs as the singer croons, â€œI still rememberâ€ and â€œthe inside of me dies.â€

The final track, â€œSeason the Sky,â€ is a full instrumental featuring a slow electric guitar in place of the lead singer. The background instruments provide a supporting accompaniment, creating perhaps the most enjoyable song on the album.

Conceivably, this album works well with Biohazardâ€™s sound and bands alike. Their older fans will most likely feel pleased with the new tracks, but it may not appeal to a new generation of rock listeners. It lacks the revolutionary quality that once made Biohazard so special and any musical progression is not apparent. It is difficult to believe in angst when the musicians are all grown up.