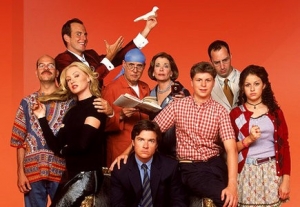 â€œWeâ€™re really doing this thing,â€ Lorey wrote on his blog. â€œMitch Hurwitz, Jim Vallely and I are off writing the new season ofÂ ArrestedÂ to premiere on Netflix in 2013.â€

The production has also begun, although the schedule is highly secretive which Lorey hinted at by saying, â€œThere are offices and parking spaces.â€

The plans were announced in October during theÂ New Yorker Festival, detailing the ten new episodes followed by a feature film. Netflix quickly joined in on the fun, making the episodes available exclusively through them.

â€œArrested DevelopmentÂ is one of the finest American comedies in TV history, and its return through Netflix is a perfect example of how we are working closely with studios and networks to provide consumers with entertainment they love,â€ Ted Sarandos, Netflixâ€™s chief content officer said this November in a public statement.

As if this news wasnâ€™t awesome enoughâ€”actor Adam Scott recently confirmed aÂ Party DownÂ movie was in the works. It appears like 2013 may turn out as the year for cult classic comebacks.

This article can also be read on AllMediaNY.com

The Walking Dead Commentary: Locked Out of Heaven

Rick's climb back to sanity from the depths of madness is pure Dantesque. A madness brought on by sorrow for...